I first literally stumbled upon a piece of RJ and The Massive at The Outpost in 2011. When I say literally, I mean literally.  At first I thought someone had left a bike there, had been terribly creative putting a big blue M on it and put it down to "oh well, horses for courses" and left it at that. 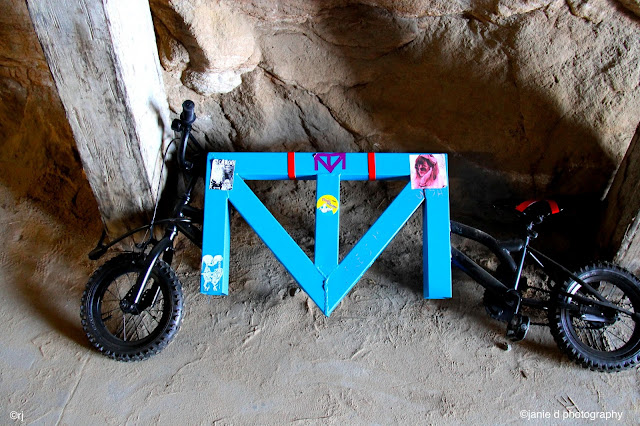 However that was Day 1 (the 2095 chick can quite proudly state she returned over a dozen times! addicted? of that there is no doubt). I found myself enjoying the solitude of life behind the lens whilst being conscious that I was in fact amidst a throng of thousands.

I wanted to try and capture every aspect of this incredible location from architecture through to installations. From the nay-sayer's to the artists themselves. As a photographer it was personal a nirvana.  Through this experience, knowledge was gained in an almost osmotic nature. Thus I gained knowledge about the world of RJ and The Massive.

Here are my 5 questions with the said RJ

RJ & The Massive: How did this marriage begin?

Wow.  It goes back further than I can remember.  The Massive started as The Thredbo Massive: it was and still is my on my snowboard crew.

I grew up in the mountains snowboarding.  Over the years our crew had different names like :FSU, TBC, eventually morphing in to the The Thredbo Massive.

That was our home resort and we were (and still are) the dominant crew at that time.

We all got together in Wanaka NZ and the title of President and the duty of creating a symbol to represent us was placed upon our shoulders...I created a symbol that day, and the following day we made several thousand die-cut stickers. 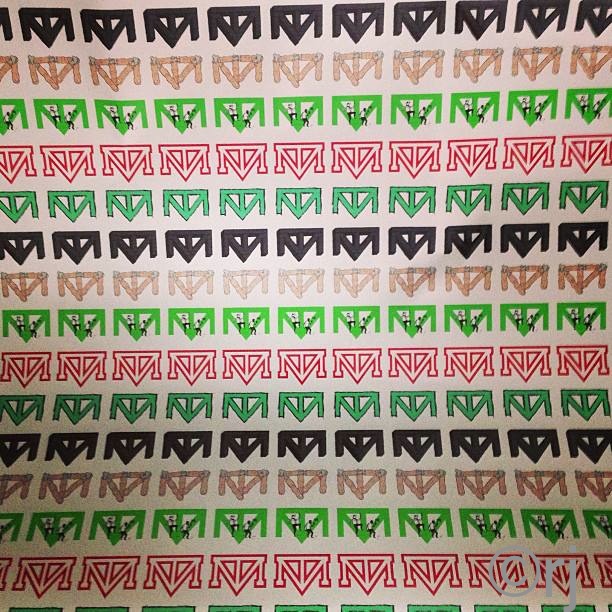 I guess sticker bombing let to just straight bombing.  The crew grew and got a bunch of press calling us a "gang".  I think that was about 12 years ago now, maybe more....

As my snowboarding career came to its inevitable end, more and more of my energy went into creative pursuits, along with Nathan Ho and John Saulo, we started the "Sidewayz" series of art shows and then we built Westsyde. 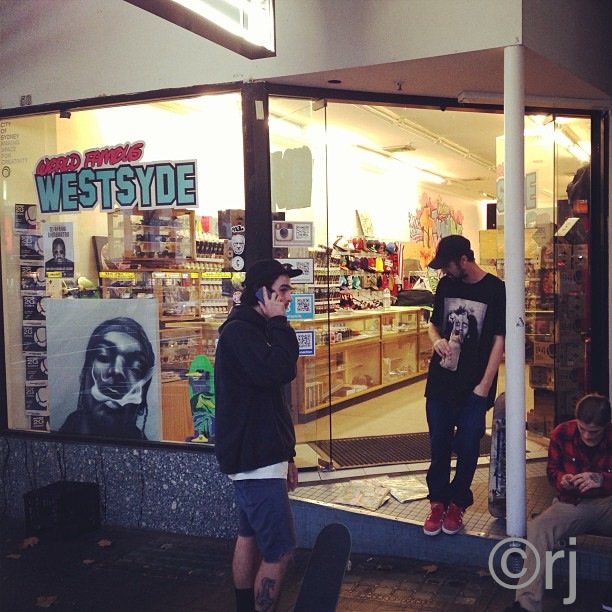 All of this pulled me further in to the street-art/graffiti world.  Eventually I decided I needed a moniker of my own: the only logical choice was the symbol we had already been bombing all over the world.  I guess it just fitted into what I wanted to do.  It's different, it breaks the mould of contemporary graffiti, it stands out and most importantly, it tells the story of who I am and where I came from.

It was only in recent times that I was lucky enough to paint with Kerupt only to find that TM was also a legendary graff crew "Tragic Magic".

Behind this "tough guy" exterior there is a pretty gentle type of person who adores his family.  Do they play a pivotal role in your creative side or do the two worlds simply remain separate

My family is definitely an inspiration.  Some positive, some negative.  I think I enjoy being the "bad apple".

My sister got married last year, so I drove down the night before (the bridal party) and bombed every single rest-stop and high profile lit up spot on the highway.  I took great pleasure the next morning getting MMS after MMS full of pics of my handy-work from the groomsmen and bridesmaids. 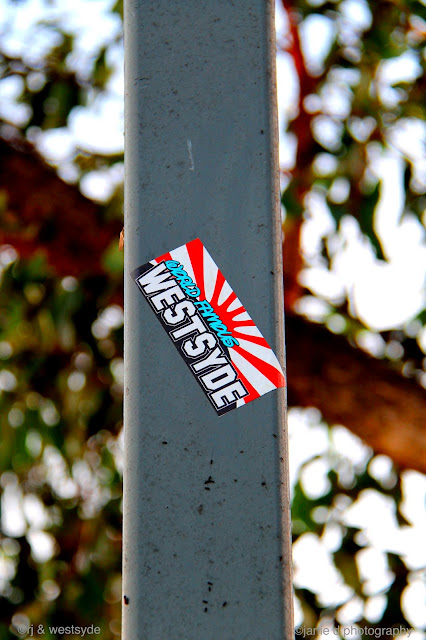 (a road stop somewhere on a highway to an unnamed destination)

Maybe it's an ego thing, but yeah, reactions from my family probably mean a lot more to me than that of any "audience" that may or may not exist.

My family have also been the subject of my art.  My grandmother was a famous model in the 50's.  She was shot by Helmut Newton and I still have the photos he took and signed himself.  To date they remain some of the very few pictures he took that do not appear in any publication...I use these images of my work: the woman you have seen holding the piece of paper in front of her chest with the symbol on it.  That's her, my grandmother: my hero, my biggest supporter. 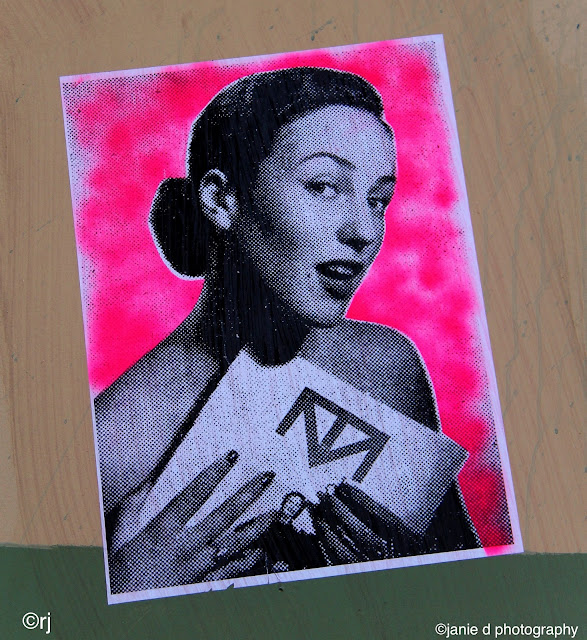 Everything.  Plaster moulds of the symbol, welded steel symbols, symbols welded inside bikes, silver & gold jewellery with the symbol in it.  Textiles, stickers, posters.  I've even trimmed it into hedges. 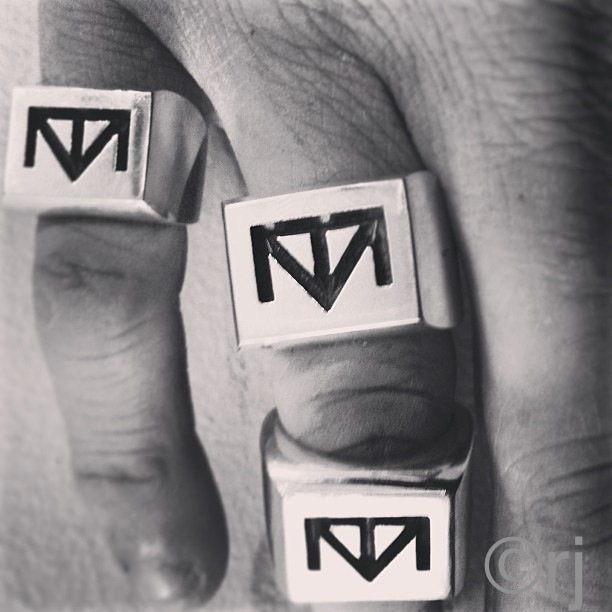 Nothing is off limits: to be honest my absolute favourite is wet concrete.

In the world of creative genius, your stance has always been fairly high (well to this 2095 chick at the very least), but a "massive" injection came by way of a now infamous artiste (whose black & white "coffee book table" book of reached it's own level of "massive" back in the day).  Has this new found iconic status enhanced or impeded you both as an individual an as an artist?

Ha ha ha!  Riidiculous!  The exposure was second to none.  Rolling Stone, Huffington Post, Perez Hilton, TMZ: you name it.

It was a HUGE press stunt and we pulled it off.  I immediately had the realisation that I had to capitalise on the exposure immediately before the shine wore off (you're not for long in the moderns press).

The story broke on the Monday and I touched down in LA on the Friday of that same week.

I booked a spot at a youth hostel on the corner of Hollywood & Highland, which I knew had access through the women's toilets to one of the most high-profile spots in all of America.  Within hours of landing in the USA I had a giant dripping black roller symbol right symbol directly opposite 2 iconic locales.  Within 24 hours LA's graff community knew I was in town.

It was a whirlwind.  I met Birdman, Pyro, Serf, Pike & Saber all within my first week. Daniel Lahoda from LA LA Arts got me a legal wall on the side of the LAPD building and Serf got me on "The Price is Right" with Drew Carey! 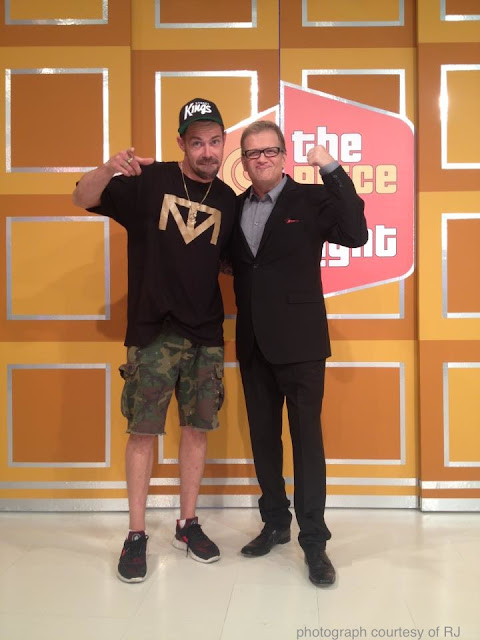 Their fans are twisted!  The way they screamed when Drew introduced me to the audience is honestly the most scared I have been my entire life.

I was only home a few weeks when Pike called me up to tell me I would be battling OG Abel, live on tv for Monster Energy's "The Chosen One".  It was during the filming of that show I got to meet and spend time with SEEN and RISK (who invited me to his studio, one of the most amazing places I have ever seen anywhere in my life).

So yeah, it inspired me as an artist, it helped make dreams come true as an artist, it definitely pushed me further than I have ever been pushed: that said, it does put pressure on me, but also my own expectations/demands to constantly go bigger and better.

What 5 words would you use to differentiate between street-art and mindless capping, so as to educate those who feel it absolutely necessary to use the blanket term "graffiti" and its apparent atrocities so as to appease the people

In everything there is a rogue element. Just because one person crashes their car which may kill another, does not mean we ban cars.

How many people die from lung cancer?  We don't ban cigarettes.

How many drunken fools hurt people?  We don't ban alcohol.

So there is a rogue element in everything from cops, politicians, the church: that' doesn't make them "all" bad, and anyone who says otherwise is lethargic and self absorbed.

"Vandalism" can be fun.  Eg: If Newtown wasn't tagged to the hilt, do you really think people would be spending thousands on legal commissions?  I think not!

Street-art? Crap term, don't like it.  It's all graffiti. It pre-dates streets and is arguably the oldest form of art work in existence.

Street-art is a soft term designed to separate it from the mindless fantastically enjoyable wonderful vanadalism.  Shut the hell up is all I can say.

Shout to: Pork, Riz, Days, One Roter & Ben Frost.  They've all helped me along the way! LEGENDS 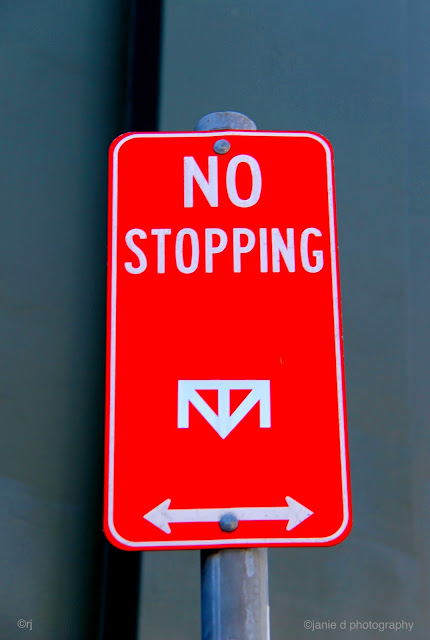 with thank to RJ for not only sharing some of his time with the 2095 chick but allowing photos to be reproduced for this article
Posted by janie2095 at 4:08 PM