My first introduction to Mizter Crystalface's work was (like with most things street-art) and accidental.  I was wandering around the dock yard area of Balmain, it was raining, I was once again getting hopelessly lost, and to cap it off I had the flu: it wasn't a great day.

Just as I was ready to concede defeat, I spied a weird little freehand on a wall & felt myself being drawn towards it.  Not wanting to defy the street-art-gods & being subject to their wrath, I took my first photo (of turned out to be my then latest and yet still current obsession) Kois. 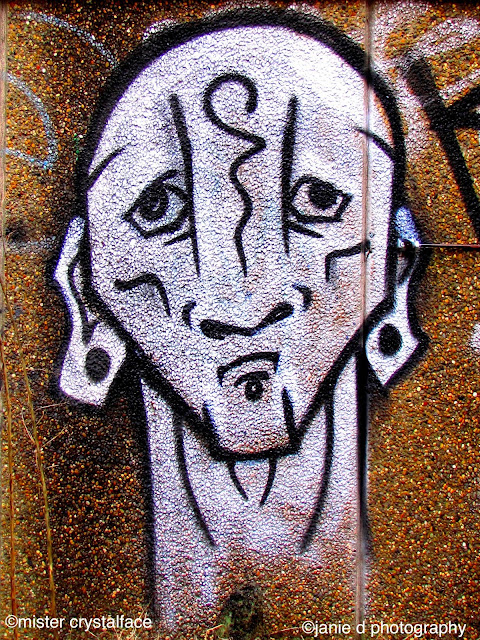 On the ferry back to 2095 I attempted to get the pronunciation correct: is coy'is or Ko (as in Do Re Me) Is. Eventually shrugging my shoulders with defeat, I got home, switched on my PC (which the 2095 must proudly shout that she now has an Mac!) uploaded the image, entered the tag and that was that.

My next encounter was at Chippendale. Same style but totally different tag name. 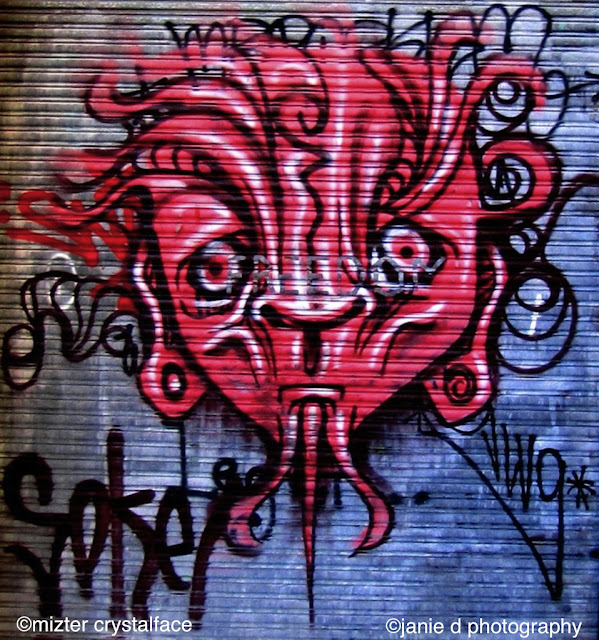 It was breathtakingly beautiful.  A defining moment as I was then presented with another pronunciation conundrum: Soke-eye.  Socke-ee.  Rather than continue with the "how do I pronounce it game", the 2095'er made the monumentous decision: it's Sokei.  Turns out I was right!

Your work is so intricate, the point of being hypnotic. How long does it take to create a piece such this? 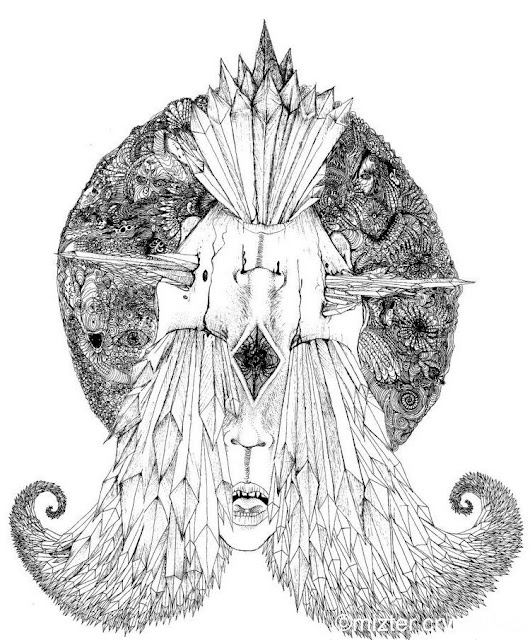 Well making them is very hypnotic.  I get in my own head-space when I'm doing them and I don't really notice how much time goes by.  It's very therapeutic.  I think my current profile image (as seen above) took me about 2 months.  Most works take a couple of months, others (like my latest) too me well over a year AND I'm still working on it.  But I don't worry about the length of time.  I just really enjoy doing them

You also have other personas.  What is the genesis behind each of their street names?

Yes, my other "personas" haha!  I've always liked the idea of hiding behind a strange name and no face.  I became recognisable under was the graffiti writer KOIS.  I wrote Kois when I was pretty down on life and sort of screwed up in the head.

I painted faces without the tops of heir foreheads, or scars across their skulls as though their brains had been altered.

I'd write things like "Kois eats razorblades","kois the psychotic meds junkie" or "i like pain".  I thought that stuff was very funny. And back then graffiti was a great outlet for me.

SOKEI became the new graffiti word when I started getting a better name, more positive understanding on life.  I chose the word "sokei" after I heard about a man who started the first Zen Institute of America.

His name was "Sokei-an".  Later in life he got arrested by the FBI because the American Government though he was an "enemy alien" working with people who orchestrated Pearl Harbour (which he wasn't).  I'd write stuff like "cellar door" next to my faces or "hive mind". 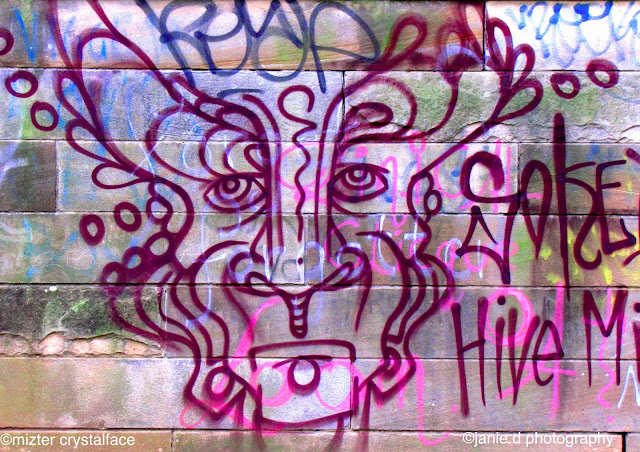 I chose "crystalface" after some amazing experiences in 2011. 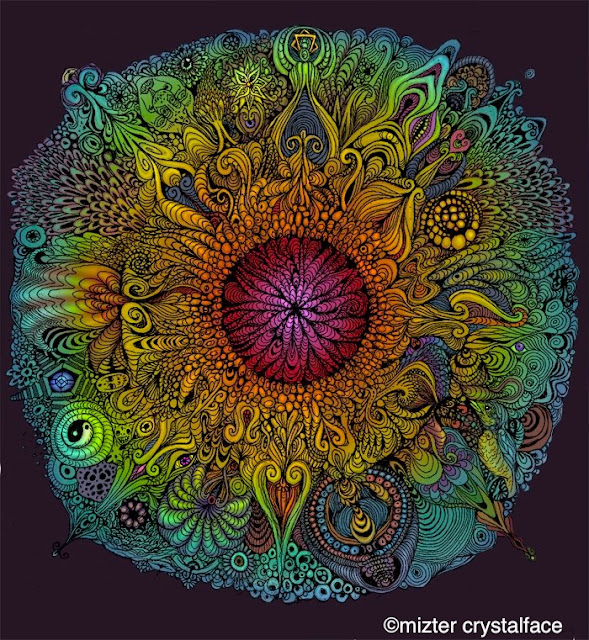 I decided that I'd try to pursue a career through making pictures and try to incorporate certain ideas in to them.  (I don't actually remember why i chose "crystalface" but I think it had something to do with seeing crystals everywhere).

When you are a on creative roll are you a "do not disturb til I'm done" or do you focus to the point of insanity?

I'm always drawing.  I am drawing when I'm around my friends.  I draw at parties.  When I'm lying down in bed.  When I am on a bus or plane or train.  And I've especially begun to enjoy drawing while I'm camping at bush doofs and festivals.

I would say that creating pictures has become an addiction and obsession for me. I feel I'm wasting my time if I'm not drawing or doing something constructive.  I'm definitely NOT a "do not disturb" kind of person.  I always enjoy company while I work.

You also enjoy collabs.  What can we look forward to in the near future?

Yeah collabs are great.  I've done a few small ones in the past with Cheungha Lim, Slug, Animal Farm, Texas, Joe42, Air Space Ark, Andros, Clint Bautista, Terrible Horrible and a few others. 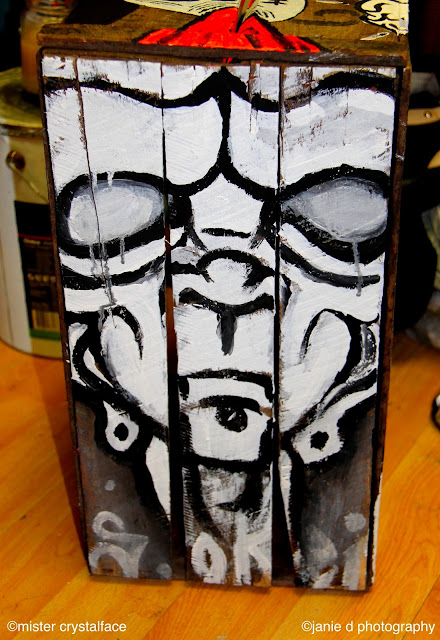 I've also tried to organise some with other aritsts like Yvette Marie Tziallis and an artist from Sweden that I really like to call "Johannek".  Still haven't got around to doing those just yet.

How often do you get back out on the street, or do you find yourself now studio-bound and restricted by time frames?

I've always got time and freedom to do things and I still go out and do a little stuff on the streets....just not so often anymore.

I think my drive to do "street art" has pretty much gone.  I still do commissions and paint people's walls, vans & bedrooms (usually for free if they provide the paint), but I find drawing and making posters, t-shirts stickers for people much more rewarding. 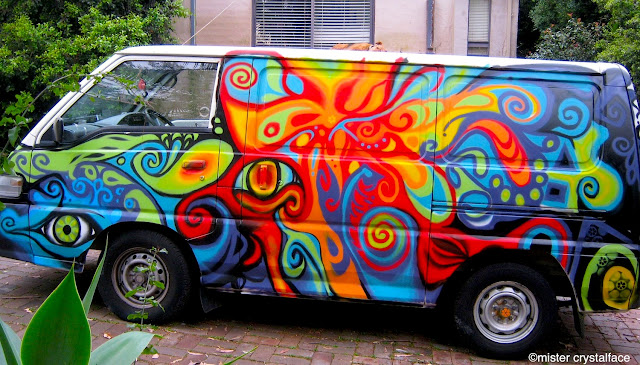 I still love graffiti and using spray cans and paint brushes, although I enjoy using pens and digital mediums a lot more now.