5 Questions with the Real Resan

It was during a sojourn around the back streets of Enmore the 2095 chick stumbled upon (and this time literally stumbled as it was garbage collection day) a piece that was both breathtaking and stunning in its simplicity. 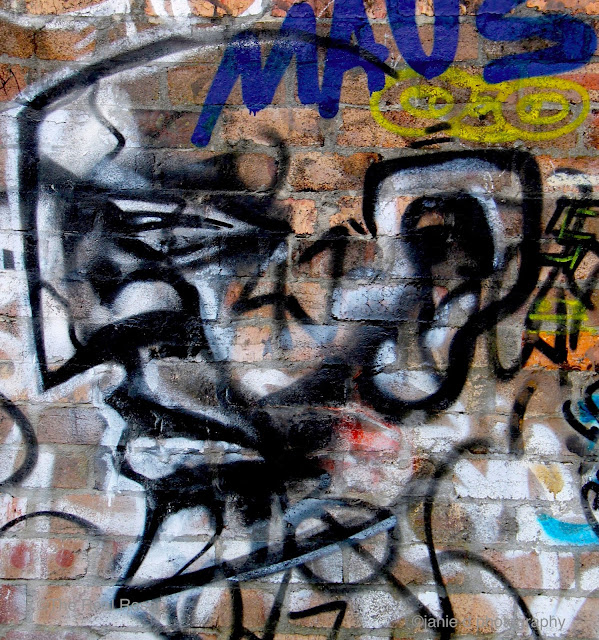 The 2095'ers preferred method of "hunting" is to walk. From this there a few benefits with the obvious one of "apparently" being fit.  However the main objective is to meander, get lost, get found, find new things, check on old friends (if you will) and let the world take you to wherever you were destined.

Thus on this particular trip the final destination was Marrickville. There is a golden rule of thumb when scouting/hunting for photography: always but always re-visit known areas "just in case".  Well this "just in case" was richly rewarded. 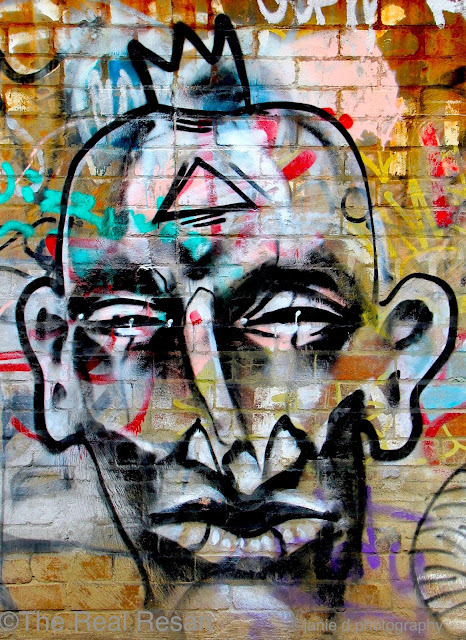 With the expression "ours it not to reason why" here are my 5 questions with the Real Resan.

As they say, curiosity killed the cat (or in this case the 2095'er), but is there another Resan which is why you are the Real Resan?

Or perhaps what is being rather clumsily asked is what is the reasoning behind your street name?

The name Resan came about when I got frustrated and bored with the letters in my old graff name.  I decided to write out the alphabet, circle my favourite letters in no particular order with the outcome being R-E-S-A-N.

I had very few original letter combinations considering there was already an Anser and Saner, so I ended up with Resan. 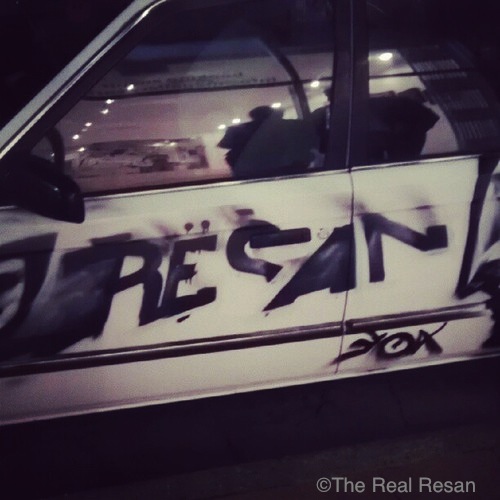 I realised there was some depth to the word and came up with my own meaning, which stemmed from the French word "sans" (without) and the prefix Re (return again and RE: (regarding or in reference to).

For some reason it stuck with me as I have always had a fascination with the emptiness or "The Void" and the beauty that comes from this space, but is so often missed.  I think of the word "Resan" as "Return to a State of Nothing".

There's a quote that has always stuck with me "it's the space between the notes that makes the music" (Miles Davis) and I think that heavily influenced the name.

The "Real" part is a bit of a pun....I found people wondering how to pronounce my name.  Most people say "Reason", "Resin" or "Re-San".  I like that everyone has their own interpretation and don't want to correct them in any way, because really it's just a made-up word.

I'm a fairly skeptical person so I took "reason" in the sense of motives and the "real" reasons people do what they do.

The other half of the phrase is a pseudonym.  "Resan" combined with the hip-hop philosophy of "Realness"...I'm Real!

What is your preferred medium, or do you find yourself at times becoming increasingly frustrated as the artist within seeks outlets that may not have availed themselves thus you create on a "needs do as needs must basis"

I've always scribbled and drawn, so drawing has always been natural and something that will always be close to my heart. 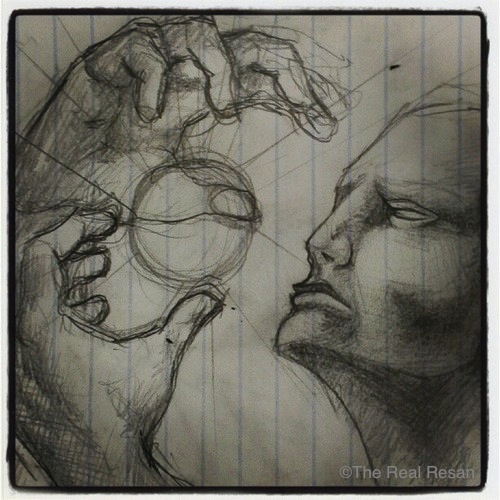 But ever since I picked up a tin of paint I have become obsessed.  Spray painting is one of those mediums that has infinite potential and is a perfect combination of drawing and painting.  The difference lies in the way you use it.

I've had training with more traditional mediums like oils and acrylics 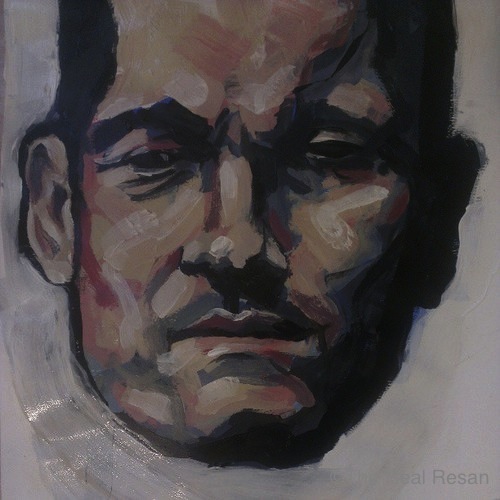 but neither of them seem to have the same energy as spray paint.

When I went to art school, I always pushed away from those traditional forms, but have recently adopted them to a greater extent, basically because I'm poor and can't afford big canvases or spray paint.

In that sense, I use what I can to do what I have to do.  To answer your question: whatever will do, so long as I can do what I must.

Who or what inspires you work

Inspiration comes from everywhere. I'm fascinated by emptiness, technology, psychology, philosophy, the future and conspiracy theories.  Each has their own basis, the unknown. I think the mystery and thirst for knowledge attracts most people...or at least the people I want be around.

The company that you keep and your environment (whether it be art, music, location, friends or family) contributes to the understanding or perception of these things, so it's pretty hard to pinpoint a specific source of inspiration.

We have recently seen some incredible collab work (which is always breath taking upon discovery by the way).  It might seem like a ridiculous question, but how do you guys divvy up the spaces (eg: when it's in a more confined location as opposed to a massive wall) 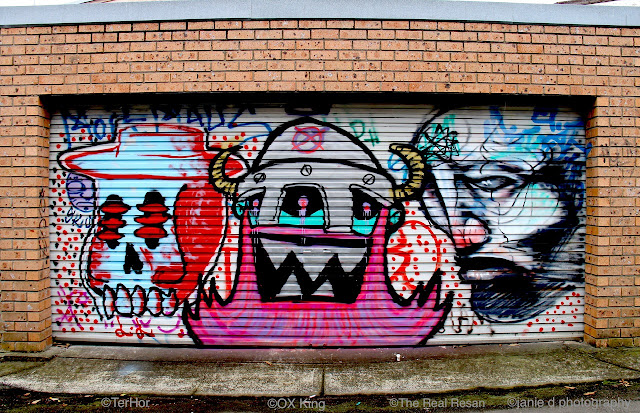 Collaborations are always hard.  I'm pretty stubborn when it comes to artwork so the people I collaborate with have to work well with me and vice versa.

In terms of divvying up the space, it really depends on the wall, what we're painting and who I'm painting with.

I tend to go with the flow so am not too fussed how much space I have to work with, so long as I know the person I collaborate with have works that fit.

I've been lucky enough to work with some pretty talented local artists, who are all great people and am proud to call friends.  It makes for an easier collab when you work with people who understand you on a personal level.

In that way I really love working with OX.  Despite the difference in our styles & techniques, we click really well on a personal level and have a good understanding of each other's strengths and weaknesses: perfect for collaboration work. 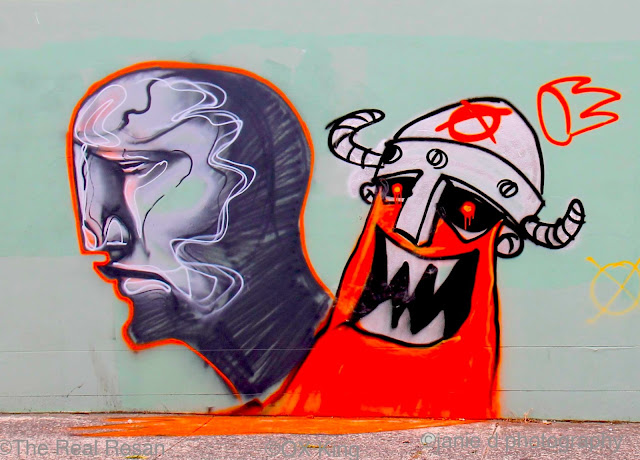 He can tell when I've missed something I can do the same in return.  It is always helpful to have a second opinion so you can pick up on mistakes you may have otherwise missed so that the outcome is exactly was it had been "planned".

Your piece is as much theirs at it is yours.  This also gives insight to your own strengths and weaknesses.

I learn something from every artist I meet and they push me to do my best whether they realise it or not. It's all healthy competition.

I've met some big players in my time but have to give proper shout outs to those I'll always hold love for so here it comes!

When I was a pure letter writer I used to keep it separate but as time has moved on I've found my personal life and beliefs have collided more frequently.

There are times now when it's hard not to include my current mood or intentions within my work, particularly since bringing more focus to my fine-art work. 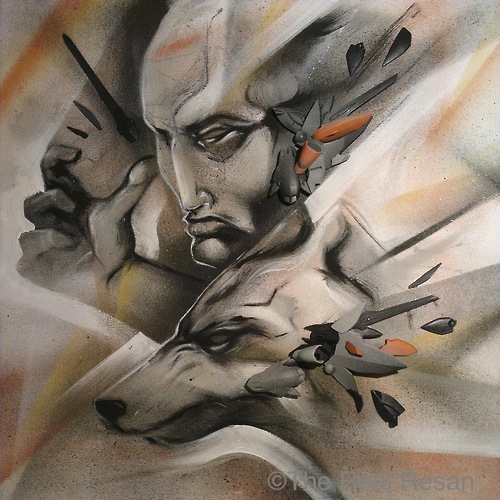 At times the meeting of these paths can be cause for some of my favourite work but can also be a heavy downfall: heartache can drive you to put everything in a piece but the wear and tear of a day job can drain any creative drive you have.

It's recognition of the right times when to work and when to quit that makes a good artist.

It's something that I continue to strive for and something I may never learn.

On that final note my thanks to the Real Resan for sharing some of his story and allowing reproductions of his works to be used in this piece.
Posted by janie2095 at 3:14 PM