Like most of my street-art ventures in the early days, you see a little squiggle and think to yourself "odd, but best take a shot cause they'll buff it & you'll kick yourself later". 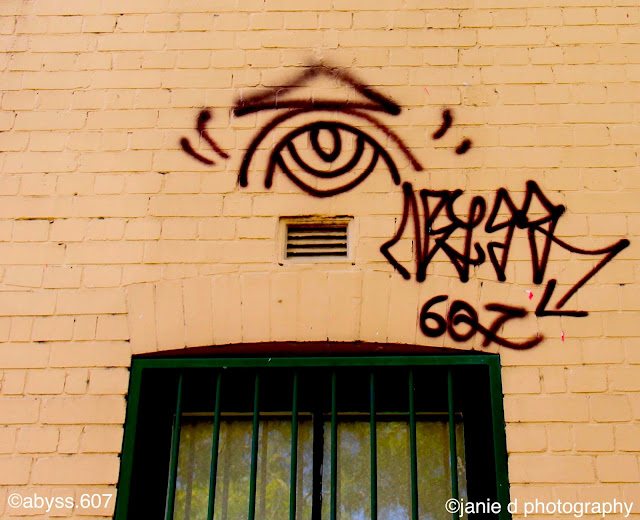 Admittedly, I did find it difficult to read the tag. Nonetheless photo duly taken and on my merry way I went, thinking nothing more about it.

A few months later a jaunt to Canberra was planned, and after desperately trying to identify locations on-line where there may be some street-art, I had all but given up hope.

With absolute respect, Canberra is one hard city to navigate. Combine that with the 2095 chickz infamous inability to be geographically accurate at the best of times, it was becoming increasingly frustrating as we were restricted for time.

In one final attempt I spied a MASSIVE piece of work by Swerfk, screamed "STOP THE CAR!"

As a rule of thumb, when one piece of art is spied, there are bound to be more.  Thus, the car was duly parked, the 2095'er climbed through a gap in the fence, jumped across the divide (aka a canal), and in a breath-taking moment fell instantly in love. 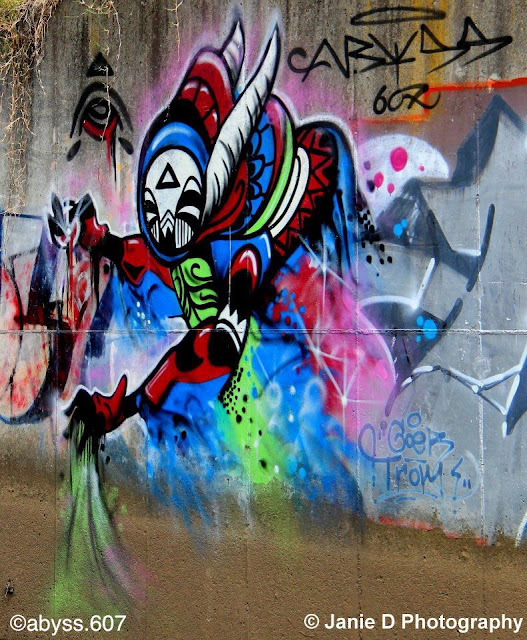 (Ironically, another street-artist had told me about this Abyss person which until then I really had no idea who he was talking about.   Of course that changed instantly)

Here are my 5 questions with Abyss.607

Do you have another life beyond Abyss.607, and if so, do you feel at times it intrudes on your alter-ego?

It's given me, I would say, more of a reason to be content with my life.  I skate & play RPG's.  I spend most of my time alone drawing or painting, so what I do resonates through my art.

What is the inspiration behind your street name?

Abyss is really a visual form that's reflective and expressive of a lot of my thoughts. Sometimes dark, but not evil; bright but not to burn, and endless with a destination only you can give yourself. 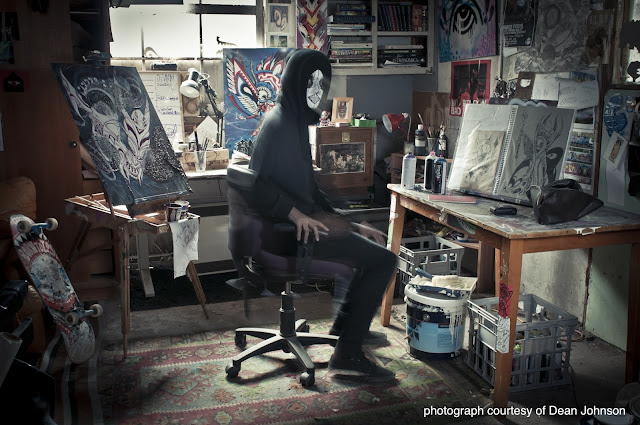 Your work is immediately recognisable and seeing it "in the flesh" (so to speak) is breath-taking.  How long does it take to formulate the concept, identify a location and then complete the process.  And how much of it takes place under cover of darkness?

A lot of the time I see a spot.  I think first of what would be best suited for it: ie. paste up if it's a busy spot where I'd like to put something nice, or spray paint if I have got the time to cover and do something big.

Paste-ups can be really effective on different coloured/textured walls, so sometimes I will make something (specific) for the wall.  My paste-ups are hand painted mostly with acrylic and do take some time to make, depending upon the size. 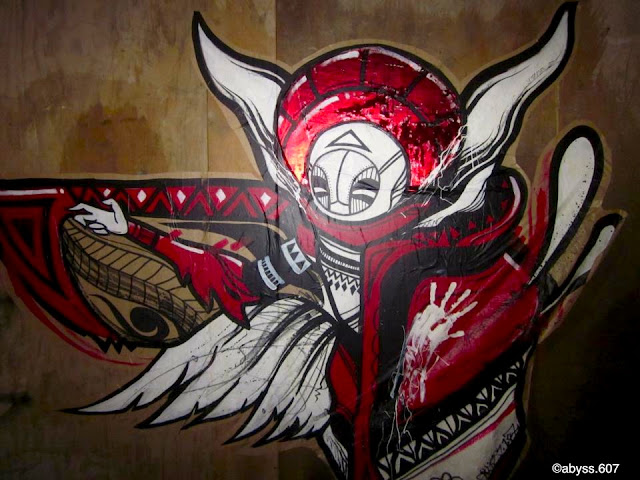 Pretty much all of my street work is done at night.  I think I've only done one outside wall in Canberra where I was commissioned.

Mostly I go out alone.  It's definitely not easy sometimes (eg: rooftops), but I plan out pretty much every spot I choose which will have a story (or reason) behind it. I'm sure a lot of similar artists can relate, but for me personally, it's more than just a painting.

When you're out there alone in the middle of the night, it's one of the times I don't feel suffocated by the things we are subconsciously fed and think about during the day.  It's engulfing and free. 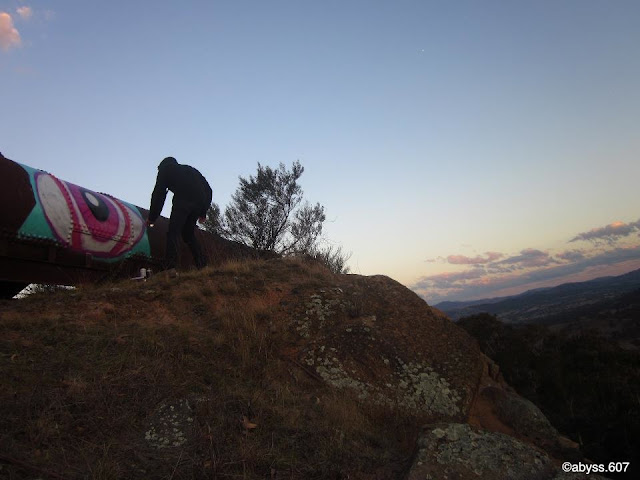 When you're jumping into private property, risking your life climbing something, start painting, all the while trying to be quick and silent, having to hide for much longer than you paint: you're up against so many elements that are otherwise nullified regularly.  It really wakes you up and makes you feel alive.  It uses your senses all whilst being creative.

Nothing beats that feeling. Although it can suck, if you've done something good and it's already buffed when you go to get the flick the next day.

A lot of what we express through graffiti, the general public are ignorant of and usually lost under wrongful "vandalism"

When did the Abyss come in to being: was it evolutionary or was it "bang! here it is! let's do it"?

More evolutionary.  I've always been drawing monsters and strange entities.  The main character I do I call "Seers".

They are watchers of time and space, on the walls they guide the heart and the spirit with strength for those who view them with unchained minds.

They also stand as glyphs symbolising our demise, depicting nostalgic ancient art and abstraction warning us of a bleak future if we don't change for the better. 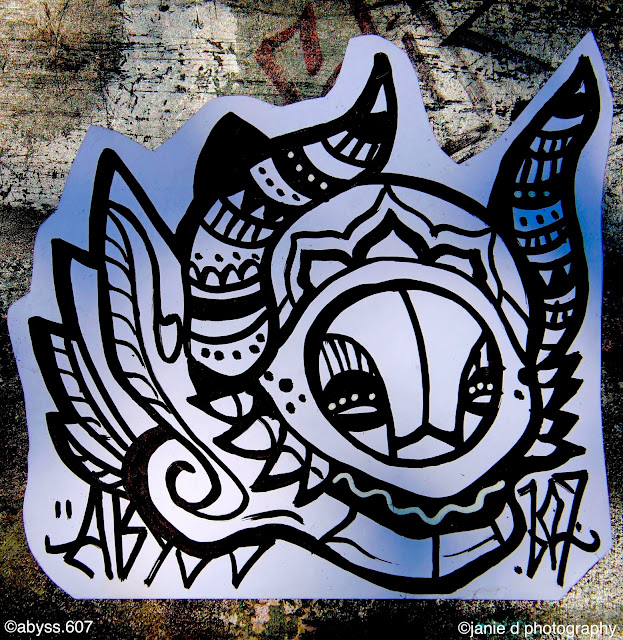 If you could sum up in one sentence the difference between street-art and capping (so as to educate the uneducated) what would they be?

All I can say is the streets are unrelenting.  Just stay true to yourself and whatever it is you want to accomplish: do it.

See ya in the void! 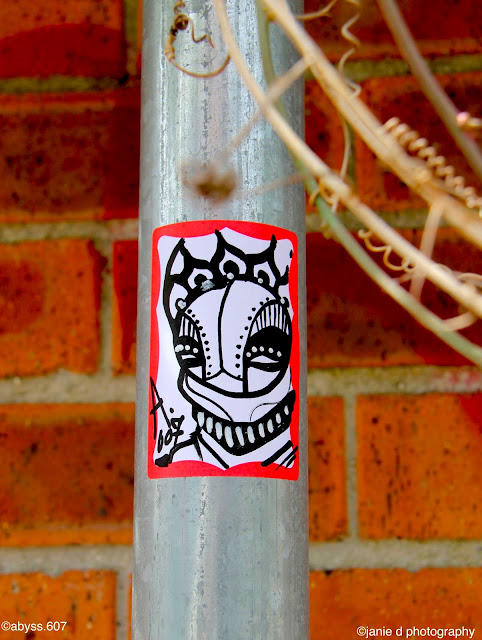 My thanks to Abyss for sharing his stories and allowing his works to be used in this interview.

For the 2095 chick, her love for his work is unrelenting and she is most impatient to get back to our nation's capital to go on the hunt for more of the Abyss!