5 Questions with Phoenix The Streetartist

The 2095 first "met" Phoenix the Street Artist whilst on one of her first jaunts down King Street.

Still relatively "new" to the street art scene and with a teeny tiny camera, it was admittedly quite difficult to work out exactly what I was shooting but somewhere within, this chick realised that whatever it was, and whomever the artist in question was, all would be revealed when the time was right and when it did, it would be incredible. 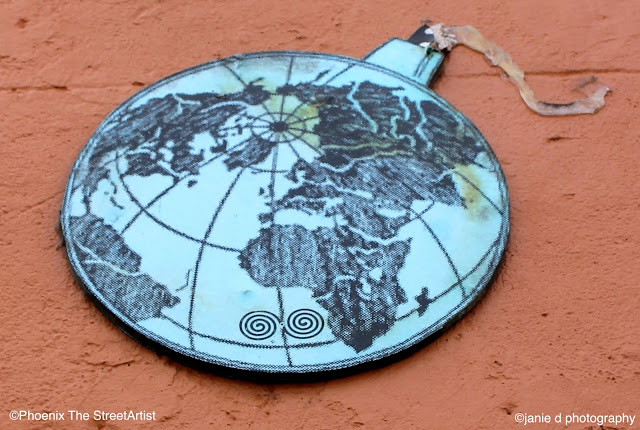 As the 2095 was meandering back towards the train station, she noticed what looked like a band-aid with the stencil of man who (at that particular time) was number one on the American "hit" parade. 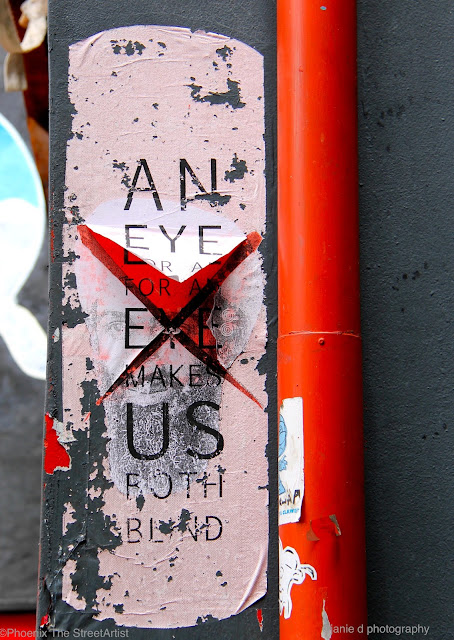 The 2095's immediate reaction was literally a double-take accompanied by some internal dialogue "that's some serious political stuff going on here".

During the process of uploading photos to a particular site, the artist made the initial contact.  For once the 2095 chick was at a loss for words.

This artist had taken the time to go through my photos!  Wow.... unbelievable compliment yet incredibly humbling at the same time.

It was during another Inner West jaunt that the 2095 chick began to notice a pairing (if you will) of pieces.  Wherever Klara Art appeared so there would be a Phoenix piece either directly above, beneath or beside. (and being the photographer that I am, I have no group shot as my style is to try and focus on each piece separately....apologies for that people)

Here are my 5 questions with Phoenix The StreetArtist

When was Phoenix born? 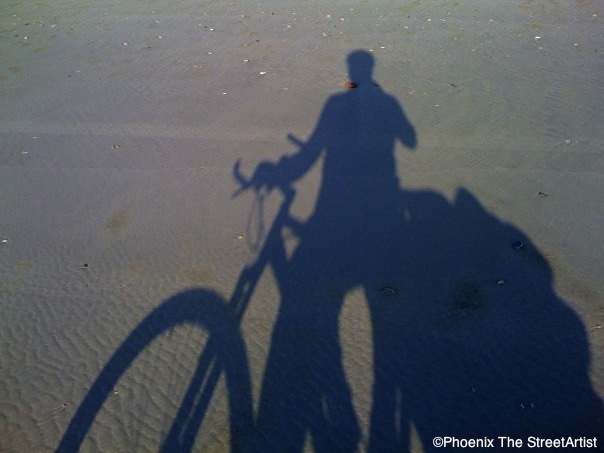 Quite a while ago you had a fire in your studio that kind of put much of your work "to bed".  How did this affect you creatively and personally?

After my studio fire in 2004 (a massive inferno which took 4 fire engines and 45 minutes to finally extinguish and which destroyed many stored collage works and my entire collage production system) I did not make are for almost exactly 5 years. 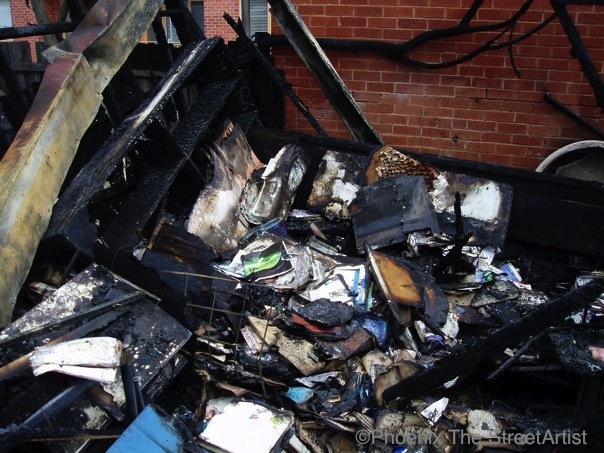 It was a difficult time personally.  I was definitely creatively 'burnt out' with regard to making visual art.  However the creative spark remained through such pursuits as making music, writing and story-telling and things like working with wood & stone.  In 2009, however, the visual arts & collage fire (within) was re-lit and I re-began my making art.

Since putting up my first street-art piece at the end of 2009 (salvaged out of the ashes) that inner fire was greatly fuelled and continues to burn brighter and brighter.  So much so, I think only my extinguisher will put it out.

When the Phoenix rises from the ashes (in the spirit of all good alchemical processes) the end result is stronger and clearer than before it burnt up in flames.

My art, my studio, my collage production system (indeed my sense of self as an artist and as an individual) have all developed enormously as a result of that fire. 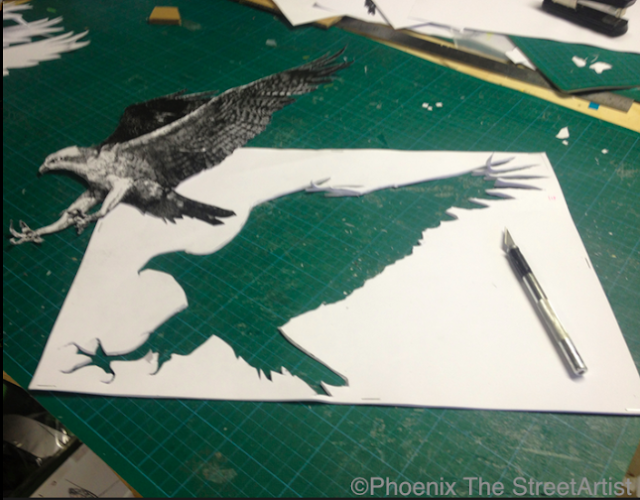 Although a very difficult thing experience, it is very much part of who I am now and everything I do creatively.

Your works are now on quite a few international walls. Can you give a run down on how a project starts (triggers or inspirations) and describe the process from start to finish

Sometimes projects are carefully planned.  Others are created spontaneously via an improvisational process at the installation site.  A site itself might suggest a work that could be added to it.  At other times the work is created in the sketchbook or mucking around in the studio: and then a suitable site is found for it. 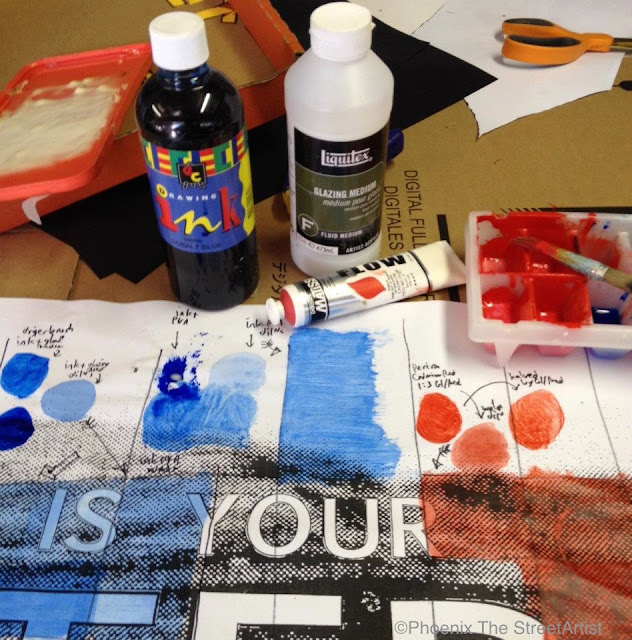 Typically when an idea drawn in my sketchbook is realised, it is taken through the stages of formal drawing of the elements involved, photocopy collage (using processes like transparency overlaying) and cut-and-paste collage: to create a master in monochrome.

This is then typically copied on various coloured papers which are cut and pasted using roller coated PVA to create finished works or colour masters.


Finished works may be pasted in this form, or mounted onto a solid material like corrugated cardboard or plywood to create plaques.  Colour masters are colour photocopied to create pasteups or stickers.

Finished pasteups are typically stuck to the wall with PVA applied with a brush or roller (although for larger works I sometimes use flour pastes).  Solid plaques are generally adhered to the wall with a translucent silicone.

Lots of my works these days are combinations of pasteup and plaque: a technique which creates works with different levels of relief on the wall. 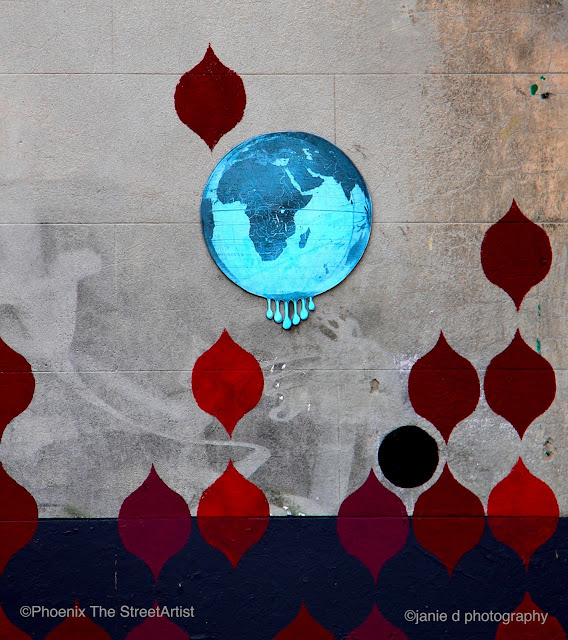 Have you been commissioned for certain pieces, and if so, what has been the most notable to date

I think my most notable commission has been my Elephant In the Room piece: printed as a large colour repositionable sticker for a wall in a home kitchen. 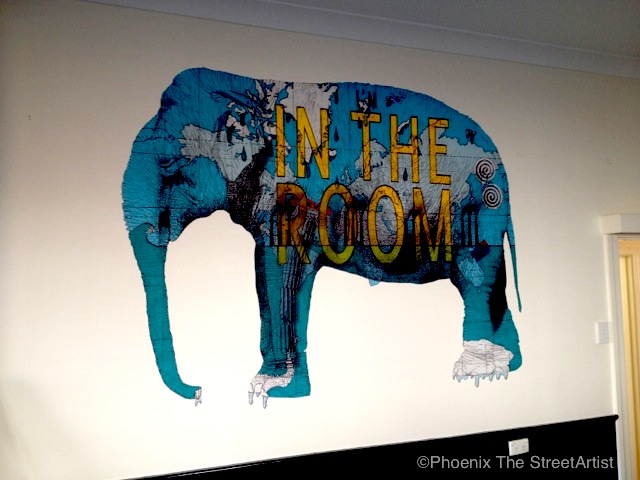 At almost 2 metres wide, that was one elephant in the room (which is hard to ignore) but still one easily peeled off in order to be stuck again somewhere else.

The Elephant is a part of my "Voice of the Blue Earth" series, in which Earth takes various forms in order to send.

in 5 words, can you define street-art and its relationship with the Phoenix

Personal thanks to the Phoenix for sharing some time with the 2095'er whose admiration for his works has reached a higher level of understanding and appreciation
Posted by janie2095 at 4:46 PM