When the 2095 started her street art hunting expeditions they were initially within the confines of "if i hear a train or a bus I know I can't get too lost!".  It was in one of these initial confines that the 2095'er spotted these somewhat bizarre cartoon'ish type characters.

As the trip progressed I found more and more of these little creatures and some placed in THE most obscure places (of course these were the days prior to street-art-photographer-necessary-whiplash syndrome!) 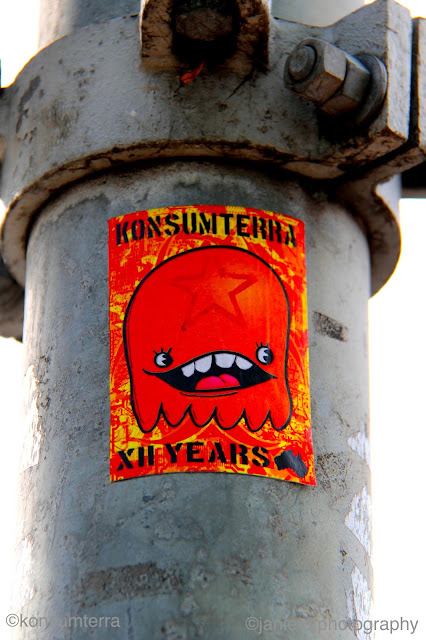 When the 2095 says "everywhere" it is just that.  It truly was a case of "I mean honestly!  How the hell do these things get put up on literally every street corner from Sydney to Perth!" (as the 2095'er is known to somewhat exaggerate, you will hopefully get the point!) 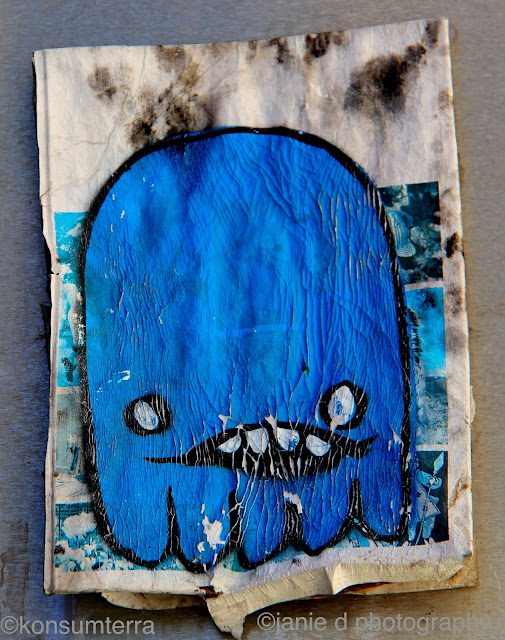 Fast track to 2011 and the Outpost.  It was where the 2095 was there on one of her numerous visits and as she walked around, she noticed a class on stencilling. 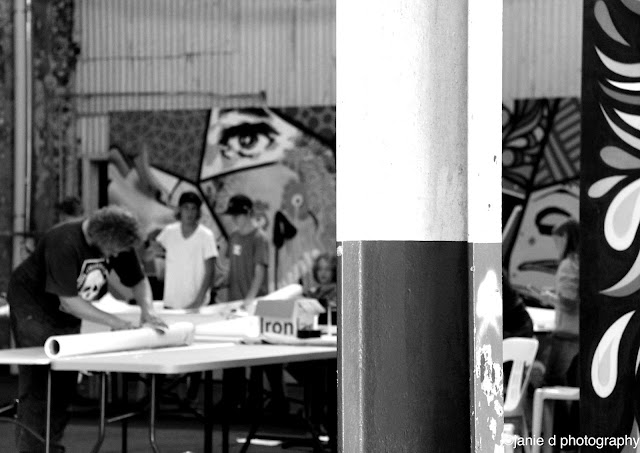 Standing there, observing quietly, praying with all her might that the dreaded shy-bug didn't kick in, the 2095'er waited til said class was finished, took a deep breath and walked in.  "Hi! We are fb friends".  A somewhat bemused (or confused even) expression greeted me.

Once my photography ID name was used there was an immediate relaxation between artist and photographer. After a bit of a chat about life the universe and everything, the 2095 continued on her way and the artist went on his. 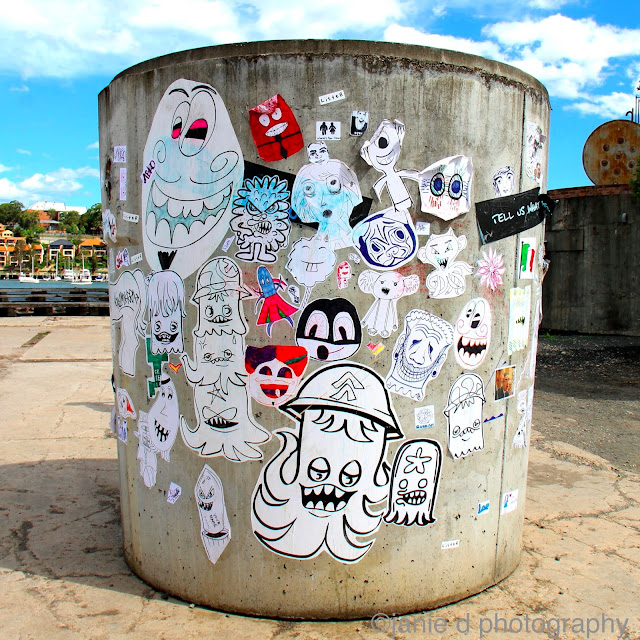 Through the magic of social media  and the occasional bumping in to one another doing the rounds of the Inner West, a good relationship has been forged and I now introduce you to Konsumterra

From stencils to paste ups to paint.  Do you have a preference or does it simply present itself and you take it from there.

I have other interests too, but I do different styles: some nameless or different names to exaggerate variety.  I've worked with comics, pinup art, photography, collage, poster art, 6 magazines: so lots of methods. 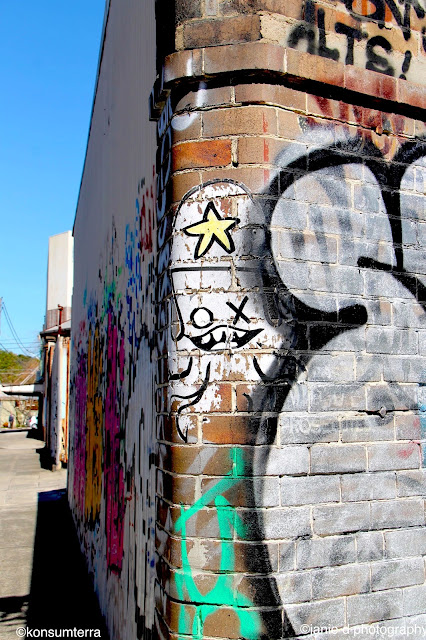 the 2095'er was stoked to have this photo included in a publication
involving  Konsumterra
Some little pasteups made from misprint zines.  Drawing is just fast and easy.  Every method has its own benefits.  I guess I'm from a culture where everyone did everything.

My brother and friends used to trash ads in the Adelaide Hills and paint them white back in the 1980's.  My friends were mostly 8 years older anarchists, punks, hakers, gamers, comic nerds and uni students as a kid.  I was in to Jenny Holzer, UK hoax art and punk poster.

In the late 1990's stickers went mad and around 2000'ish stencils were a way to make stickers.  I was in a studio of paste artists using collage: it was a good gender balance in this scene.

I started teaching, doing tours and lobbying government and councils, doing art gigs 2-3 times a week as well as DJ'ing.  Because I was starting to get ill, I decided to move to Sydney for something new as I felt Adelaide was in the doldrums with most of my generation gone.

I didn't intend to be an art pro but somehow it happened.  I worked at MAY's, Casula Powerhouse, on councils and more. 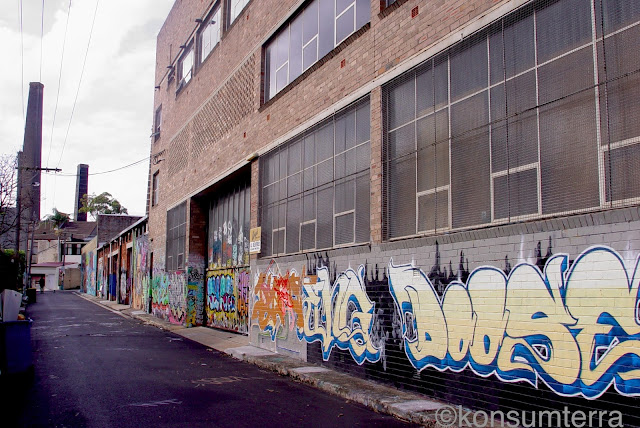 At the moment my health issues make it difficult to keep up my art but I don't feel the need to lobby or advise on government policy anymore.

I'm trying to build more non-art interests and friends at the moment because I have really missed hanging with scientists and carny folk.

Some of your works at time can be perceived as quite political (which for some may be slightly confrontational) and thought provoking.  What are the triggers behind some of your pieces.

My work is when at its best, even if not obviously so, the methodology and references often are. 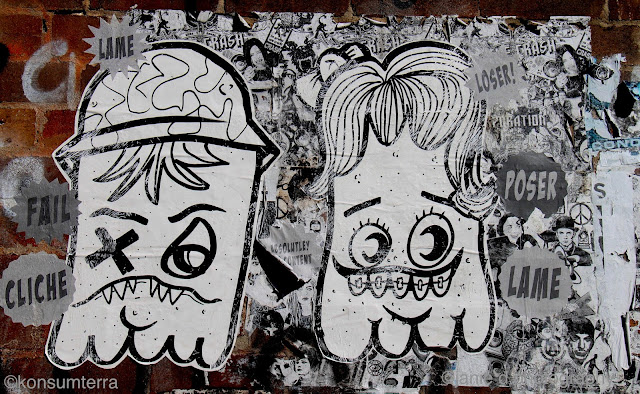 It's better to be funny if you are preaching as it tends to work better.

The world was already confrontational before I was here.  I think artists fight monsters and try to make monsters lives harder.

Looking pretty is ok too, but pretending it makes you clever and faking that you have "something to say" is a bit silly.  Faking it badly is more harmful than not bothering.

I have a degree in Philosophy so art is my chosen weapon.  I don't need to put names on all my work.  Different names I used have different subjects and styles and materials. Some are bigger sellouts, others only for street and I don't talk about.

I make nice things for kids too: only mildly subversive.

You also teach stencilry. Is there a particular age group you really get a buzz out of teaching and is there a stand out experience you are able to share

Age differences vary accordingly.  The younger are willing to try different stuff, where adult students tend to have a better understanding/idea of what they want and therefore plan bigger and more ambitious works.

I enjoy the challenges of all.  Unfortunately stencilry has been thrashed by schools and do-gooders so hard I think it has made lots of kids see it as an inauthentic art form. 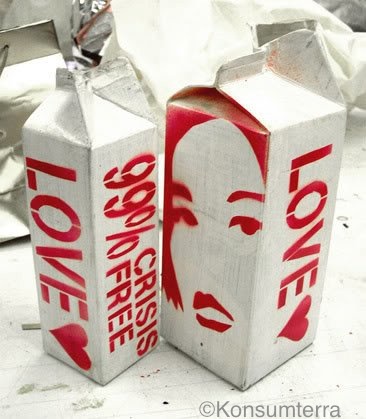 I still teach stencilling because I think it is good to educate people about street-art and its increasing normalisation.

The more who learn about it, less fear it.  Probably acceptance of stencils over more secret society of tagging contributed also.

I've had lots of students win art prizes, even in categories I would not put stencils in, which is pleasing.

I usually use HaHa as a benchmark for new stencillers.

In the contradictory world we live in, where there seems to be some inherent need to put  a label on either a person or lifestyle so that it fits in to a "socially acceptable" box, where do you see the future of streetart

I'm not going to philosophise or worry about street-art anymore: I'm just gonna do it and I don't care if anybody else cares.

My opinions don't matter.  It comes and goes as a popular interest and there are many younger relevant artists out there.

I'm happy if I can create the illusion of more variety on the streets.  Relief art has been around since the Stone Age unlike my opinions (which will never affect anything).

I like local artists who are driven by something other than career, fame or money 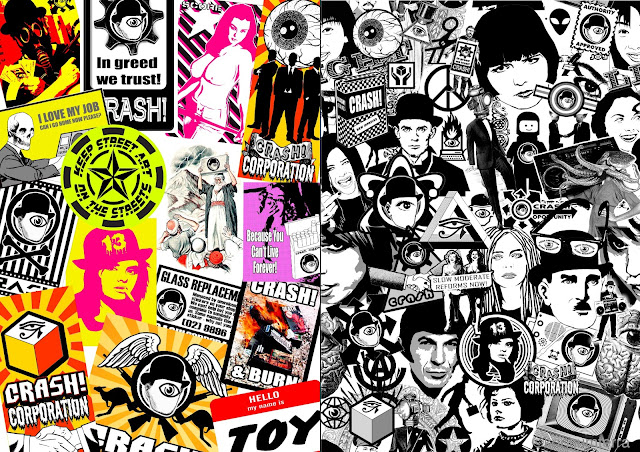 With thanks as always to Konsumterra for sharing time and some photos with the 2095 and let's catch up sooner rather than later my friend
Posted by janie2095 at 12:57 AM