The Glebe Tram Shed or, to use its proper name, The Rozelle Tram Depot: known for being the 2nd largest depot to service the Sydney network from 1918 until its closure in 1958, for being a major place of employment and in the latter part of its life the "mecca" for street artists, photographers, music video editors and more. 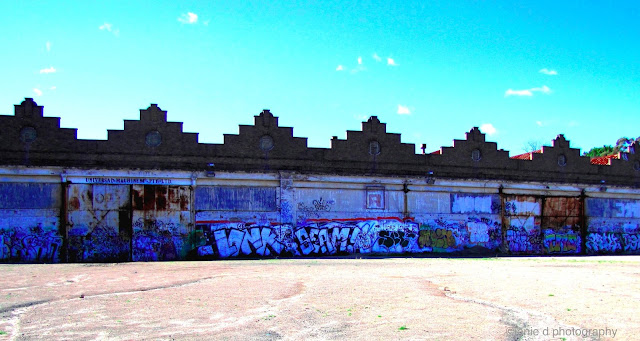 The 2095 had known about this location for quite a while and started to see more and more photos taken by lovers of adventure, streetart and the "whatevs".

As with most ventures, the 2095'ers first attempt to scout this Tram Shed was a complete failure.  It was raining, there was a boom gate, a bored looking Security dude and to be honest she just was not in to it.

There it was: that boom gate again. BUT the 2095'er noticed some people using what appeared to be a short cut path. So she manoevered around the dreaded gate, walked down said path tentatively towards the somewhat dilapidated Harold Park hoping that she would not hear a "OY! YOU! What do you think you're doing" from a menacing security officer.

Luck was on the 2095's side.  No one around.  She walked up towards the most ENORMOUS building, heart palpitating, mouth dry and desperately trying to not appear on anyone's radar (though for anyone who has been to this amazing place you are somewhat exposed no matter how hard you try) and squeezed through the half-open gigantic door and was greeted thus: 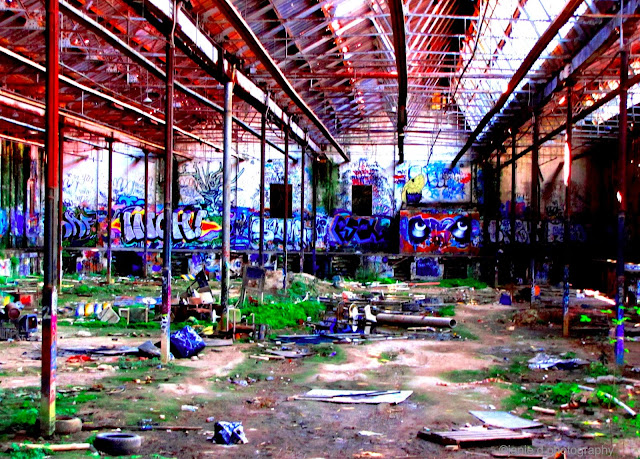 To say it was a breath taking moment would be an understatement.  To say that it felt like a horror movie where the only sound was the wind through the broken glass ceiling and big rusty door opening and closing would be 100% accurate.  To say the 2095 hit the jackpot....indescribable.

Trying not to make a sound, or freak herself out unnecessarily, the 2095'er walked cautiously down the ramp and fell straight in to the enamoured arms of this place.

Rather than prattle on (and one must excuse the quality of this but it was done prior to the 2095'ers imac!) let the little clip demonstrate the Tram Shed's initial impact.

Floating on cloud 9 and feeling "safe and smug and superior" (apologies to those who are not yet acquainted with one of the 2095's other loves "Rake" from which that mini quote was taken), desperate to get back to the confines of the abode to review and relive the experience, the 2095 chick made plans for an immediate return the following day.

Again in order to avoid the long descriptive adjectives this clip is a reflection both emotionally and photographically of this particular visit.

It was around this time that the 2095'er was becoming somewhat impatient with her camera in that she was not able to extend herself as a photographer.  Thus it was on her 3rd visit with new EOS in hand that she returned excitedly.

Ultimately it would also be her final visit as literally a week later this amazing location, this incredible building that had SO much potential to be anything it wanted to be, was boarded up with 24 hour security as it had been ear-marked  for some "new residential accommodation development" as apparently Sydney simply doesn't have enough.

So beautiful Tram Shed you are missed by so many people and thank you for being in our lives.