The 2095 first came to be in touch with Simone by way of the wonderful world of social media.  Being a former Novocastrian the 2095 felt duty-bound to make a "connection" immediately!  After all we (ie. Novocastrians) are famed for jumping on the bandwagon of friendship, even more so when that particular someone has a passion for street art and all its composites.

The initial "introduction" came as a result of .....(does she need to state the obvious the 2095'er wonders aloud....oh go on then....just do it!) The Outpost in 2011 where photos/documentation/capturing streetart moments were duly shared, admired and talked about, albeit via the fibreoptic world.

A little further down the track, having keenly watched street art promotion and development grow in the 2095'ers old home town, it was time for a jaunt up north. Fortunately, having grown up in the area, the 2095 had absolutely no issue with geographical navigation as for once she was on top of things and then some!

AND it wasn't raining (see previous 2095 street art entries if not already done so in order to make sense of this rather obscure sentence).

Before the self-indulgent street art discovery tour, the 2095'er wanted to go back to her old school chapel and simply enjoy just "being". 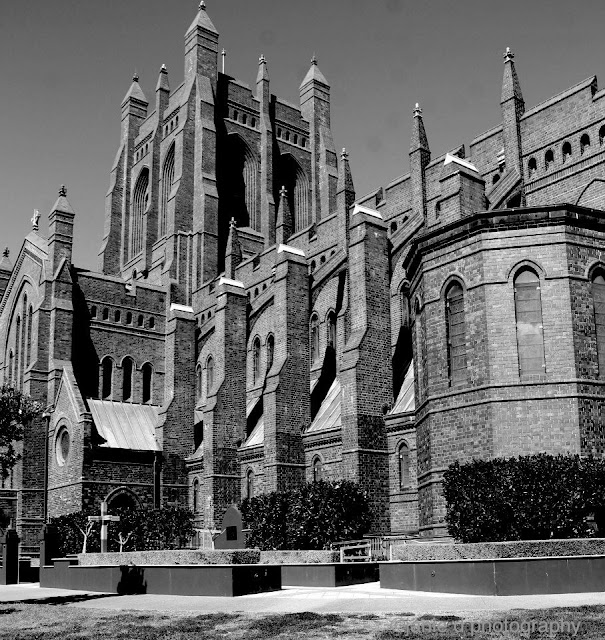 That done, a hunting we will go and boy did the 2095'er find some AMAZING pieces and joy of joys NO CARS!!!!  Truly! No cars to block the walls!  It is every photographer's dream to not only find amazing pieces that haven't been tagged or capped but in a car free zone????? Doesn't get better than that! 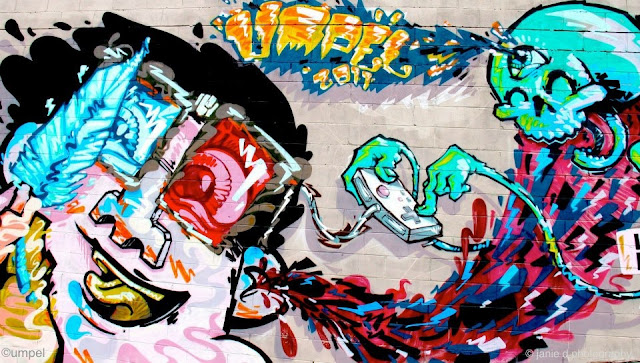 You are a person of many "hats" with a passion for promoting local artists and street artists alike.  When did this love come in to being

It started when I was in Mudgee studying Visual Arts for my HSC where I did a case study on a local graffiti artist who is now known as CHEMS.

CHEMS even took part in the first exhibition I organised as Founding Director of an artist-run initiative ARThive (which you can read more  "here").

I have always been fascinated by art collectives, and people who flock together based on an agreed idea/philosophy.  I have always loved graffiti too, so it's simply a natural cohesion of two interests.

After working at ARI, I learned a lot more about managing exhibitions and I found the "white cube" thing boring and am much more inspired by the outdoor spaces.  I have been documenting Newcastle streets since 2008 and I love how some spaces are hidden until someone makes that bold move to put something up.  Truly inspiring.

SAW is a major project of yours along with TiNA.  While being fun it's also a sensational marketing tool.  How many headaches and how many (dare I suggest....) meeting with "beverages" consumed did it take to not only come up with these concepts but more importantly their names

TiNA (This Is Not Art) Festival was founded many years ago by a bunch of Novocastrians. Funnily enough the name was inspired by a tag on an empty building called Latec House. Newcastle has its fair share of empty spaces which are HUGE sources of motivation for the work I do.

In 2010 I was Festival Director for TiNA (and  will be taking taking the role as Acting Director this year) and I wanted to create some visual signage on buildings to show people something new and happening. 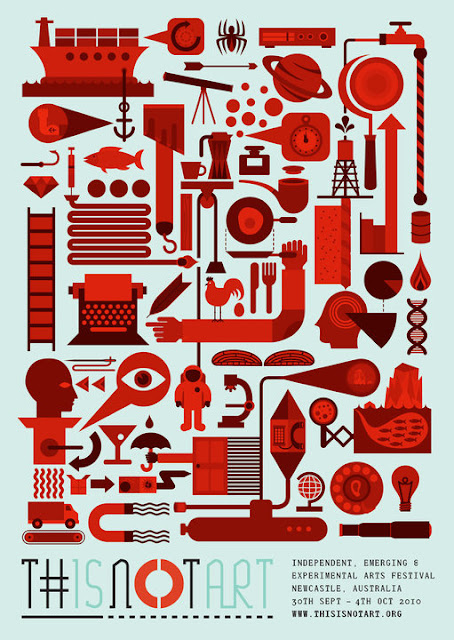 I got a grant, found a curator and we organised a temporary art walk.  Interestingly once it was done ,property owners wanted more!  I noticed that the artworks were gaining more attention but people didn't know who was actually behind the project, which is why I felt it was important to create a "brand" so that the artists could gain online recognition at the very least.

Surprisingly for SAW, there were not many meetings to nut out the name.  I was working with an amazing colleague Angus Crowley (read more about Gus "here") who helped with the branding of ARThive (ARI).  Over a coffee I told him about my idea to create an outdoor gallery in the Hunter Street Mall with a view to have it expand/encompass the Newcastle region and he came up with "Street Art Walking" or SAW (we loved the acronym aspect of it as well). 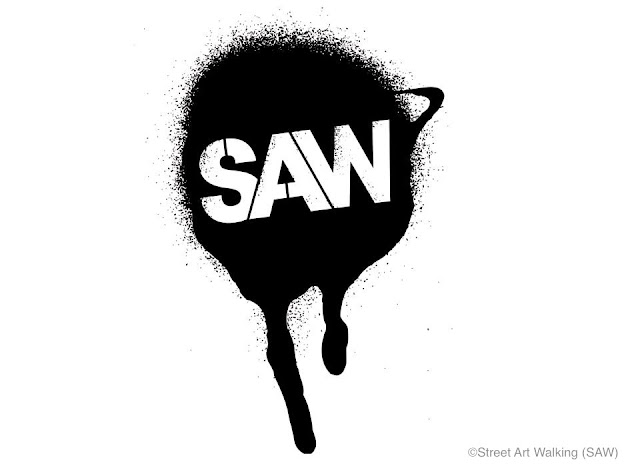 I really have to throw a HUGE thank you to Gus who is an incredibly talented designer, collaborator, photographer, illustrator and an amazing person to work with.

The SAW brand & logo has been further supported by Brett Piva at Pocket Design (you can learn more about them "here") who is again another fantastic person to work with, and together we created a map, postcards and a new website over the last 12 months. 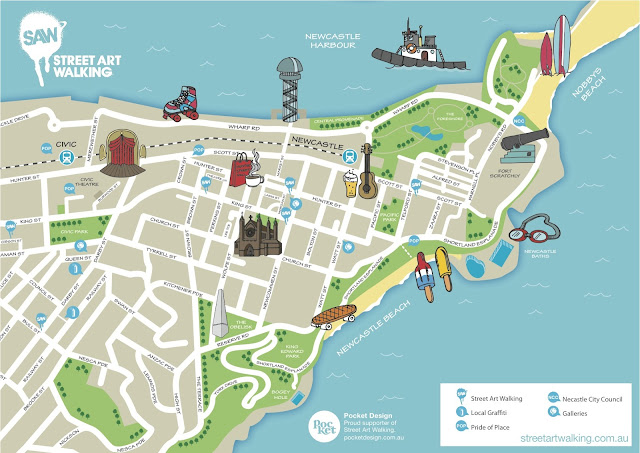 I have been so incredibly lucky to find the right people who not only have an intrinsic understanding of SAW but have worked in such an easy collaborative way I can't thank them enough.

The locations of some of these insane walls are a particular fave (being a former Novocastrian) with the beauty being not much traffic so as to reduce the angst whereby a full appreciation can be achieved for both photographer and viewer. 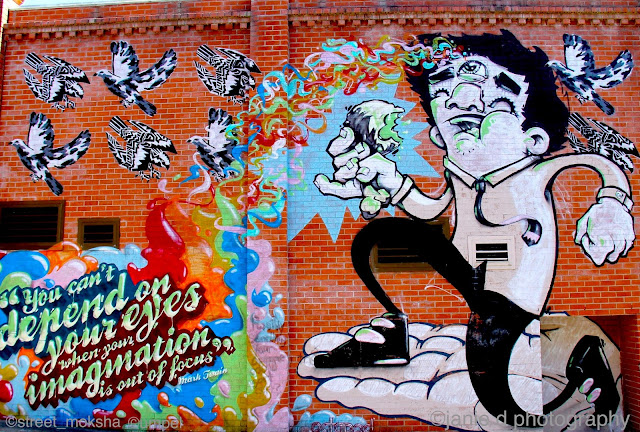 Working and liaising with artists and council: how long did it take to implement from proposal to finished "product" 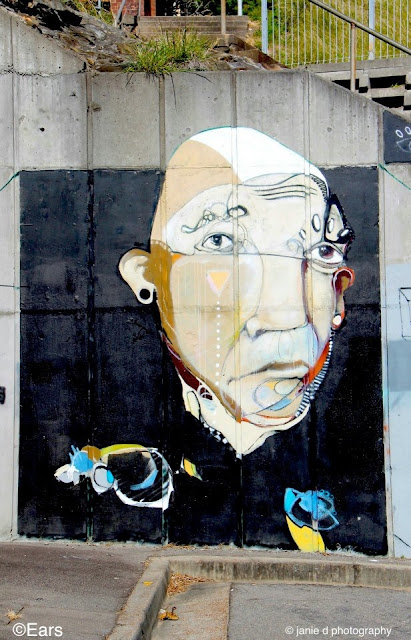 We have now moved into the Placemaking realm, which involves more community and business consultations and therefore the process takes a little longer.

Not forgetting that the weather has been known at times to throw a spanner into the works!

The biggest challenge I have faced is paying my own bills on a regular income.  Often mural work is sporadic and not incredibly lucrative.  Much of my time is spent in sales mode, pitching artworks and advocating on behalf of the artists so they get justifiably paid.  As such, I have to find other work to keep myself afloat which at times means planning future street walls can at time fall by the wayside.

Fortunately SAW is starting to gain some real momentum and with my growth of understanding processes/requirements etc it's becoming more efficiently run.  The dream is to have walls rotating every 3 months in sync with the seasons.

Well I have been scheming up an event idea for a while now.  SAW came really close to working with The Opening Hours on an event last year, but the pieces unfortunately quite fall in to place.

This year however SAW has been given many walls to manage, so the dream of rotating on a regular basis is becoming a reality. 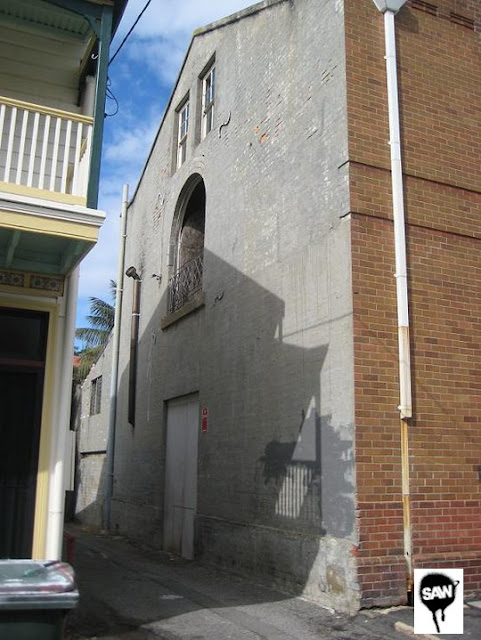 We have been very focussed on the Hunter Street Mall and hope to launch first event next year.  In the meantime, we want to start offering personalised walking tours, showing off Newcastle's hidden gems. 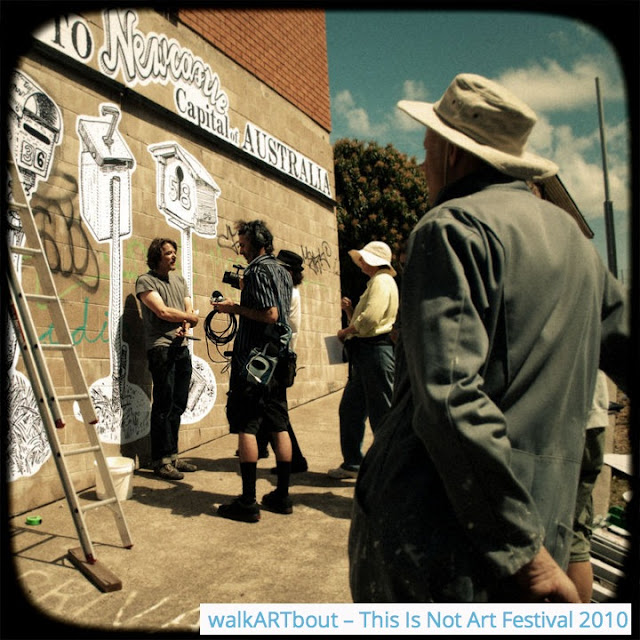 And as I have to maintain a regular income, often SAW "dream" projects have to tick over slowly.  BUT I have been contacted by locals to work on a street art event later this year....top secret stuff!

Stay tuned and keep your eye on Newcastle cause we are dreaming BIG time here!

How would you sump of the world of Simone, SAW and TiNA in 5 words

So my friend Simone, thank you for sharing some time with the 2095 chick, can't wait to see what's in store for SAW & TiNA and hopefully the 2095'er will get back to the 2300 sooner rather than later!

And a massive thank you to Ears, Umpel and Street_Moksha for allowing the 2095'er to include her photos of their amazing walls for this article.

and only cause she can....keep that street art a happening Newcastle cause it's gooood (it must be noted that this art is copyright to the artist, but the 2095'er simply could not NOT include it as a tribute to the amazing steel town talent) 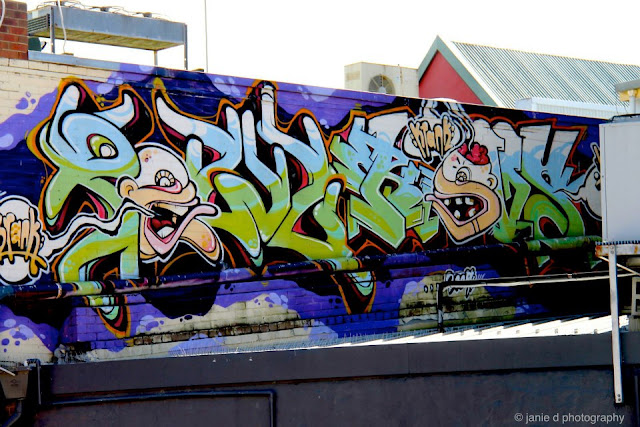