Life at times can be curious and it was quite a while ago that the 2095'er accepted that whatever path you find your feet on should be embraced and if you hit a wall or stumbling block then don't push it, cause somewhere along the way it will re-present and take you where you were ultimately meant to be.

During the 2095'ers initial meet/greet with Konsumterra, one of his sentences during their conversation was "you've got to meet my friend Melinda.  You two would really get on".  "Sure!" came the 2095 chick's somewhat confuddled reply,  as she was still in the haze of "I can't believe I didn't have a crippling shyness attack and finally plucked up the courage to speak to a much admired artist" mode.

A few months later having bumped in to Konsumterra where a solo hunting expedition became a duo, he again said "you've really got to meet Melinda.  You two would seriously get on".

Whilst there actually was to be an actual face to face meet and greet planned, the forces of the universe must have deemed it simply wasn't the right time . Yet through the magic of the fibre optic world, the 2095'er not only became acquainted with Melinda, but found they do have many things (apart from the mutual love and admiration of all things street) in common.

One is zero tolerance for complete time wasters.  The second being a love of words on walls.

Welcome to my 5 questions with Melinda Vassallo

Your passion for street art is no secret.  When, how and why did this love affair begin

I have lived in the city for most of my life.  I have always loved seeing the writing on the walls; Bugger-up, political statements and the graff for as long as I can remember.  It was also so interesting to follow, like reading an uncensored paper. 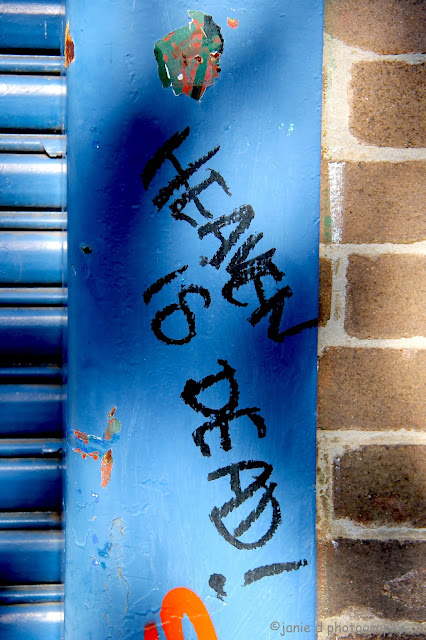 Your book "Street Art of Sydney's Inner West": was this a spontaneous decision?

I used to watch what was happening on the walls around Redfern and Newtown in the 90's.  I enjoyed it, but took it all for granted.

When I moved to Erskinville I had a love affair with two major pieces.  Marchai's Got a Gun on Erskinville Road 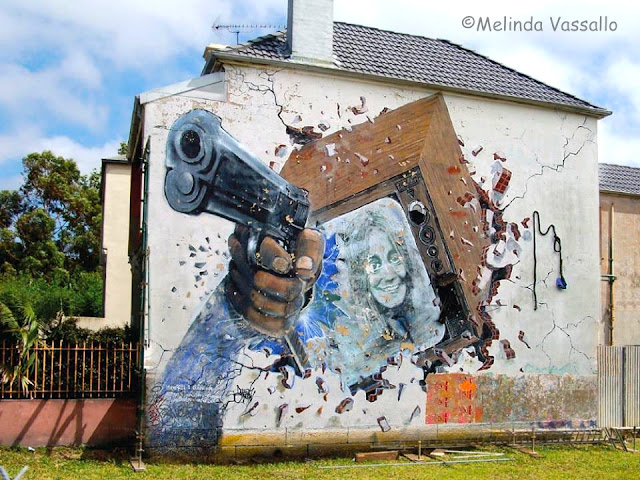 and The Skippy Girls on Wilson Street.

In a matter of months it seemed The Skippy Girls were badly vandalised and house where Marchia's Got a Gun was being renovated and the mural destroyed.

I was unprepared for the amount of distress it caused me.  I was devastated to say the least.  It was a sign.

Some time after The Skippy Girls were restored by residents it make me realise there were more people out there, just like me, that loved these Murals and Graff.

I started thinking "someone has to document all this before it's gone!" 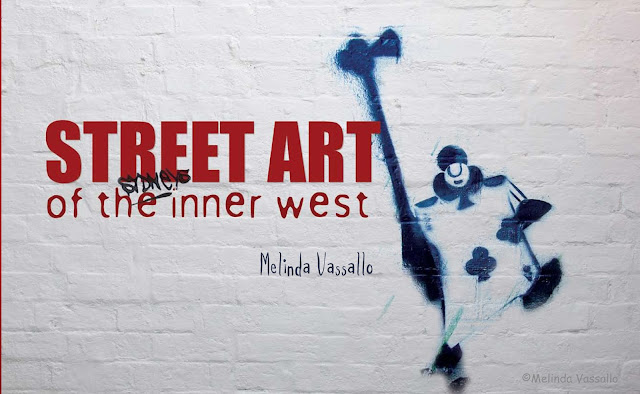 From planning to print: can you explain the process, duration and your sense of achievement upon seeing the final product as a bona fide publication to be held physically in hand rather than within the confines of "brain space"

I think if I had to really thought about the whole thing properly, I might never have done it.  I knew nothing about Graffiti/Street Art really.  I just knew I liked it and there were heaps of people out there who also appreciate it. 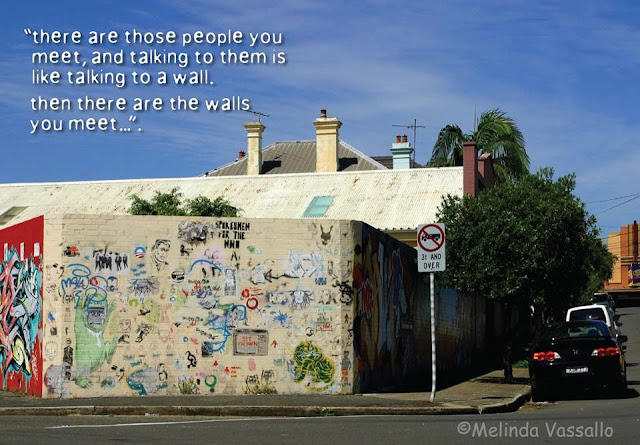 Firstly it was the idea I was responsible for documenting it all and before any notion of what I was setting out to do, I started to take photographs.  It was more like an obsession (and as with many others, the 2095 chick can totally relate to this).

I was mad with driving around and taking photographs.  It was fun, exciting, always changing and something new every day.  I talked, or I should I say bored my family and friends with it all until I thought "hell why not turn it in to a book!  I have the skills and knowledge to do it so why not!". 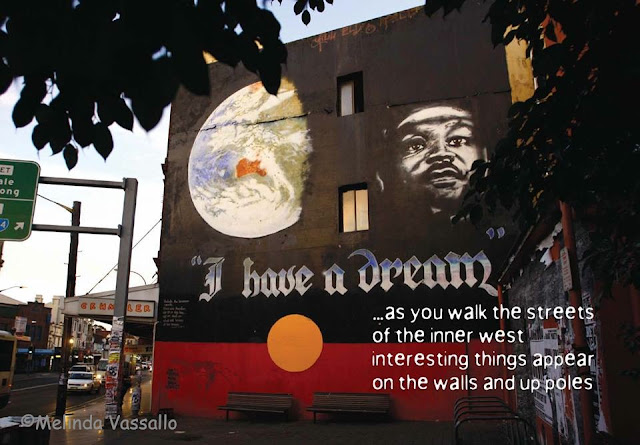 I applied for an Arts Grant and I was more surprised than anyone when I actually got it! I will always be grateful to Marrickville Council for that; it's what made the whole project a reality for me.

Research was hard in 2008 as most artists preferred to remain anonymous.  The book launch was a blast and it was the first time I  met most of the Street Artists.  I love that I did it and still can't believe it when I sell a book.

As with life, so does the perception and acceptance grows, expands and matures. How have you seen the street-art movement evolve and do you feel it is now being viewed as an "accepted" freedom of expression by the artist, therefore allowing itself to be placed within the politically correct and socially acceptable box of "art", rather than mindless scrawl or paint

Amazingly, the more I find out about the Graff/Street Art scene the more I feel how little I know!  If I had as much knowledge as I do now, I might not have assumed I could successfully write a book.

It was my vision for the book that the artists be heard and recognised for their passion and their art.  I also wanted the general public to recognise and value the walls of the Inner West as a living canvas.  Over the past years I have seen this all evolve with mutual respect from the public, council and artists.  I don't know if my book helped, but I sure feel pleased that is as socially accepted as it is today. 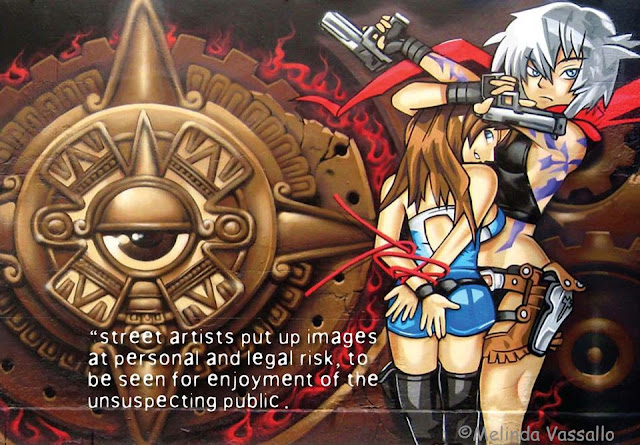 Street Art is the perfect gallery.  It is un-curated, alive, constantly changing and evolving.  It's out there free for those of us who are aware and have our eyes open.

Before signing off this interview, the 2095'er (along with many many MANY people) would like to thank Melinda for her book, her continual and ever growing love for street art and on a personal note, for saying "yes" to be interviewed! 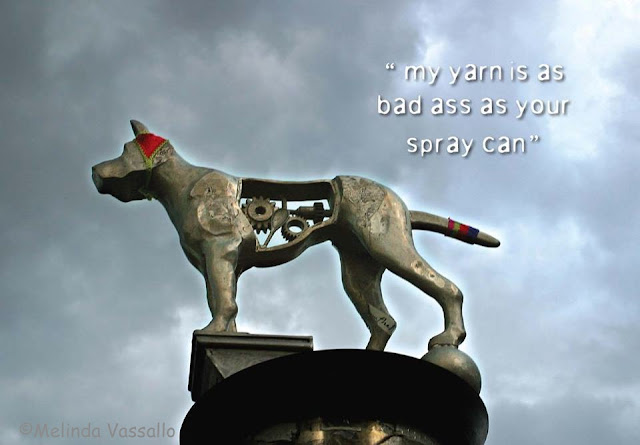 Now if you are interested in buying Melinda's book it's available for purchase at Better Read Than Dead in Newtown, Gleebooks in Glebe, Museum of Contemporary Art, NSW Art Gallery or online at Fineline Designs (click "here" for more info)