The 2095'ers introduction to DogFight was reminiscent of that with BlackCat and given that they are inextricably linked it is not at all surprising.

There was something about this style that caught the 2095'ers eye but what really struck her was how these stickers seemed to double in population on each of her streetart expeditions.

Always up for a bit of discussion with herself, the 2095'er reasoned thus: "he's obviously very tall and has no sleep OR he has a following of millions like the Pied Piper who simply drown in delight in slapping these babies up OR it's a combination of both" (and yes, the 2095 chick did in fact make silent self-talk to external "she's bonkers" talk on many such occasions)

From lightposts to handrails, doorways, street signs...this guy was EVERYWHERE! 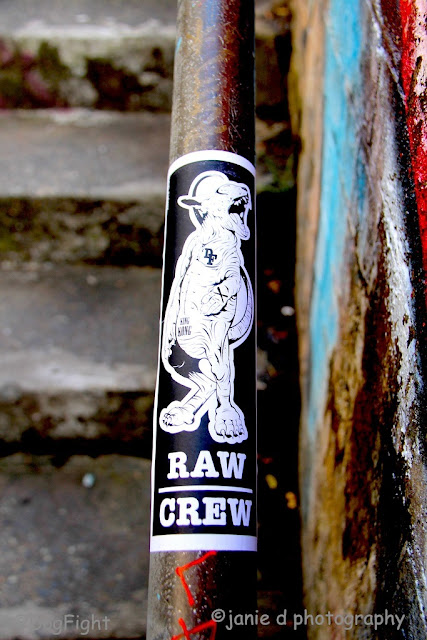 Who is this dude she wondered.

Then, as if stepping in to a brave new world, the 2095'er made what she fondly refers to as 'a cold call for cowards'.

Why is it when not having a friend request accepted on social media it seems to be a less confronting or upsetting rejection than if by leaving endless, almost stalkingly like, voicemails sounding like an hysterical female who needs a life, which ultimately never get returned.

One of the 2095'ers observations was that whilst from a more city locale end of the Inner West was saturated with these dogs (as was the city itself), there didn't seem to be any on the other side of Edgeware Road and beyond.

And with that, here are my 5 questions with Dogfight

Who exactly is Dogfight

Well Dogfight isn't really anything.  The name "Dogfight" is just there as I needed some kind of name otherwise it's got to be over explained in conversation.  The amount of times I've tried to explain "Lil white dog character"!  It's just easier this way. 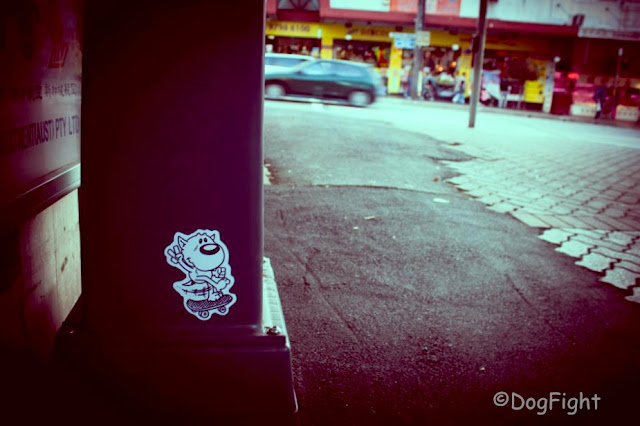 I use the name Dogfight regarding anything I do, whether it's graphic design, clothing, stickers or whatever...it's just a name.  I thought it sounded cool, I liked the idea of taking something that already meant something and giving it my own spin.

To me, I'm not even thinking about actual dog fighting, which is totally rank: I like dogs!  It's more about the "fight in the under dog", like saying "it's not the dog in the fight but the fight in the dog".

The underdog will rise kind of thing.

I came up with the dog character in its current form around 2001-2002.  I originally paired the dog with a pig character named Bacon and was gonna do a comic on the two of them named "Bacon Bones", but instead chucked em on some stickers and went about sticking them about the place.

After a while I scrapped the pig, stuck with the dog and came up with the name "Dog Fight".

I had gone under a few different names before then as well.  The actual dog character doesn't have a name or if it does it's just "dog" (like the Dog out of Footrot Flats).  It's just an every day dog, no particular breed or gender...purely a dog. 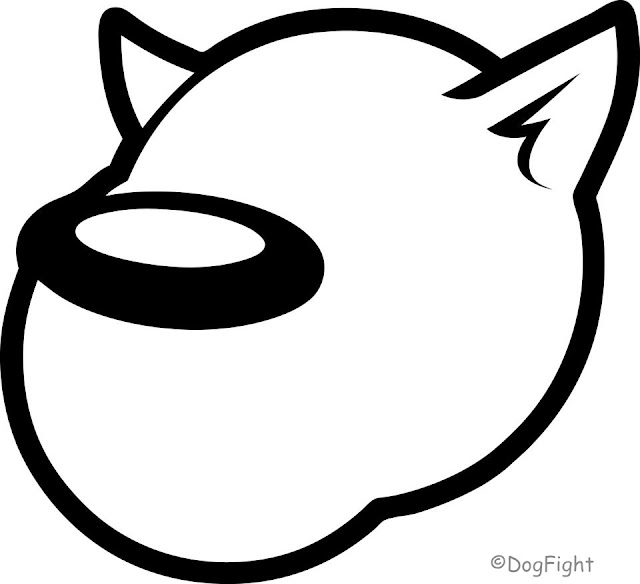 I wanted to create a character that could kind of exist in its own right.  I always have a Dot & The Kangaroo type thing in my head where I wanted the dog to live and exist in our world, but as a cartoon, where people could see and enjoy him without it really belonging to anyone except the viewer at that time, so obviously graffiti and streetart were the perfect outlet for that, as the dog could pop up overnight to inhabit an area without all the non-sense of who put it there or why, simply that it's here, you live here, it lives here, now play nice! 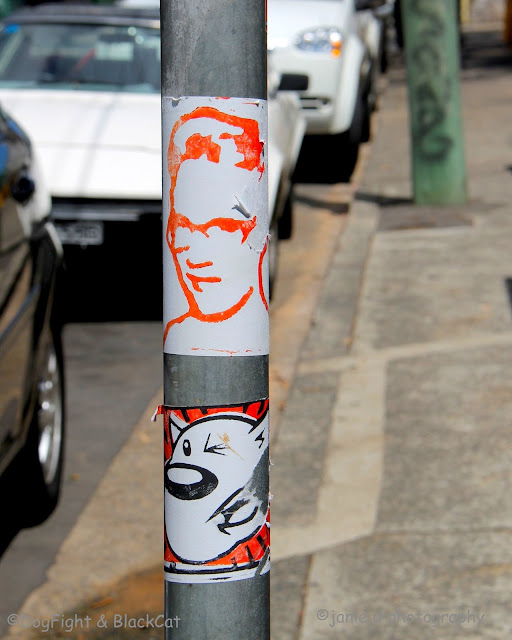 I've never had the plan to be known myself.  In fact I often do things especially to reflect this.  I wanted the dog to be known: hopefully by the time I go the dog will just be known as an iconic trait of Sydney and my friends, family and son can continue it as a permanent fixture of Sydney's landscape....like pigeons and cockroaches (LOL).

From insanely HUGE paste ups to slap ups that fit nicely in the palm of the hand. How much planning time is needed for these enormously impressive pieces and do you choose the location prior to print, or is it more of a "print done, location will present itself when I'm out and about"

For larger posters/jobs, I will often have a location in mind and I'll just work out how big I can go, how many hands are required (if required), what the weather is like etc. Other times, I'll just load up with paint or a bucket and handful of posters and see what I come across.

For the most part, things aren't overly planned but when they are planned, I like to go all out and turn it into some Mission Impossible style venture but that's more to make an event of it and have a bit of fun; or if we are filming, gotta be extra careful. The only thing I know for sure is it will be The Dog. 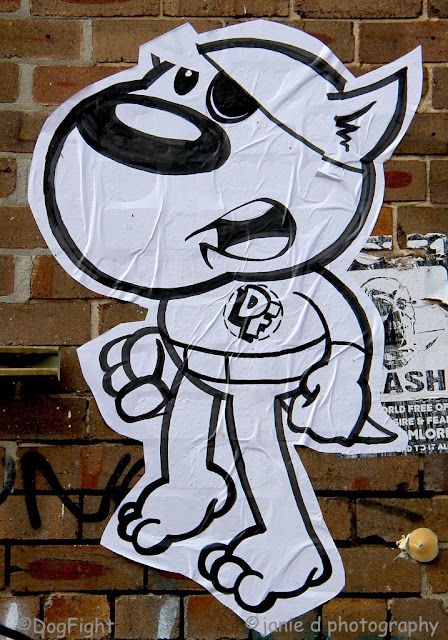 You recently did a collab for a video with Big Dave.  How did that come about

Me and Dave work together on a hell of a lot of projects and will continue to do so for a long time.  We built a friendship after I had a quick prison visit.  He was basically saying what I was thinking which is what drew me to him plus he had design work, I had designs and we share the same work ethic.

A lot of people are just trying to get something out of something, whereas me and Dave built a bond over wanting to create something valuable from nothing with the understanding that it was the journey and the experiences we would take from it (which mattered most).

With that in mind, we both have priceless experiences, opportunities to meet people neither of us thought we'd ever meet and basically rip it up!

As far as this particular video project goes, he created the song for me back in 2011 so I could use it as music in one of my sticker videos.  He always liked the song as it's pretty rough and fun for him to rap and he wanted to do something new with it. He came up with the idea for the video and I was cool with that and the rest is history!


warning: if easily offended this ain't for you!

We have worked on a million things together in the past.  I did his debut album artwork as well as art for other acts on the KP Label, posters for festivals and other concerts for him: all sorts of jobs for things.  It's good!

Solo is always good as after a few years you have so much experience under your belt: you know how you going to do things, the approach you take, the plan of attack etc.  And anytime I'm doing anything risky I prefer to be on my own.  I'm often a little over daring or perhaps even cocky in what I think I can get away with, so doing things on my own eliminates taking anyone down with me due to my risk taking.

If I'm with other people I choose to keep it pretty tame for the most part, although I choose what tasks I will attempt depending on who I am with.

I've got a very close circle of people that I can count on one hand, who are what I consider "the wrecking crew" (not an actual crew and not all artists themselves!), and they are the people I plan bigger riskier stuff with that often requires more eyes, more hands and a genuine trust and care for each other: resulting in everyone being hyper-vigilant to ensure the job gets done, done well and everyone stays safe, out of meddling hands and gets home. 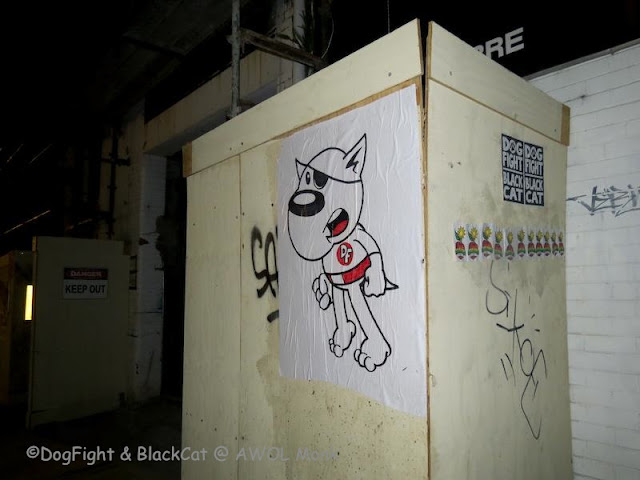 With that being said, I do enjoy good company on long walks and there's nothing like seeing you and your peoples art up in one spot with a united front.

Then there's the Cat of course (check out the 2095 chick's blog done with BlackCat "here").  Me and the Cat, well we just get the job done.  Often our stickers are done in the same format whether it's screen printed, Lino cut, digital print, hand drawn, square or circle. 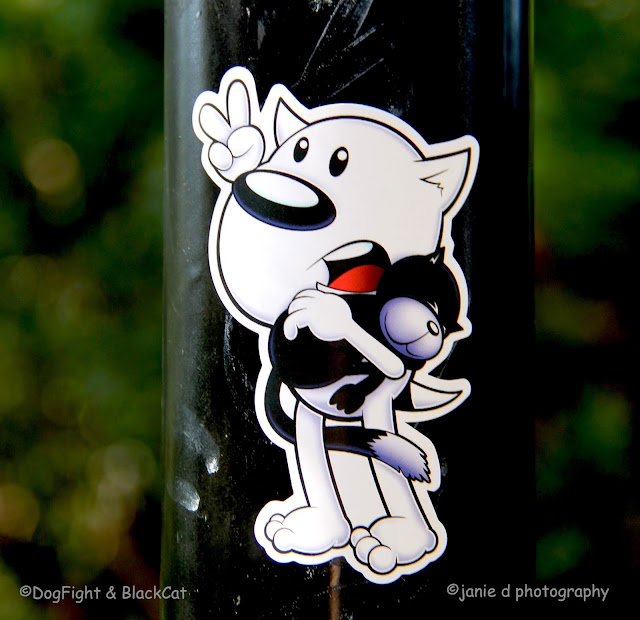 That's because we sit there and make them together on whatever materials we have at hand and often experiment with and discover new techniques.  If I print stickers, I print hers too and she does the same.  So ours are often the same but different!

I'm not sure.  We play arts & crafts every day.  There will always be more Dog in all shapes and forms.

I also do a fair bit of airbrushing and other stuff so who knows.  No use saying something like "there will be exhibitions" or things like that.  Just take a walk down the street...the exhibition is on, it's free and damned colourful!

DogFight has also started a doco which so far has taken 2 years and in his words "it probably won't be out for another 2 years!" so here's a trailer of things to come

And you can buy some of this dude's amazing work (t-shirts, stickers etc) on his website.  So just click "here" and the 2095 chick reckons there just might be something for everyone!

Add comment
Load more...
Older Post Home
Subscribe to: Post Comments (Atom)
All images and text remain the property of the artists interviewed for the purposes of this blog and janie2095 (also known as: janie d photography) and cannot be reproduced without specific permission.
Failure to do so may result in legal proceedings